Posted on September 30, 2001 by Erik Gustavsson 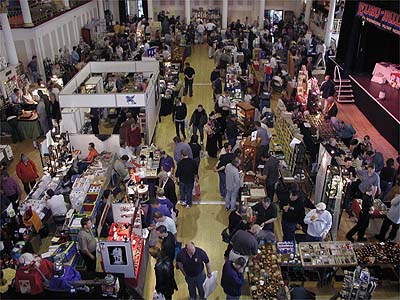 Friday the 21st of september Ulf, Magnus and myself boarded the plane from Gothenburg to Stansted airport north of London. The security personel was quite curious about the white cardboard boxes we carried with us, and we all looked at the x-ray monitor to see how a plastic kit looked like on x-ray.

The trip from Stansted to Folkestone was uneventful. We managed to catch all the right trains. When we stepped of the train in Folkestone we met the gang from stockholm, Mirko, Gunnar and Toni. Mirko and Gunnar were staying at the same hotel as we, the Southcliff Hotel.

On the evening that day we ate dinner at an nearby indian restaurant. We were quite a few people. There were mych modelling talk that evening. We continued back at the hotel where people started to bring out their models. A perfect opportunity to ask them how they did their magic.

On saturday morning it was the time for me to try the thing the englishmen call breakfast. This consisted of tea (ofcourse), toast (ofcourse II) and bacon, egg, sausage, some toast drenched in fat?! and baked beans or fried tomatoes.. my cholesterol warning beacon sounded in my head.. not that I am a person overly concerned with eating healthy, but this made McDonalds look like health food..

The hour between breakfast and the opening of the show gave a small opportunity to do a little sightseeing. The Leas Cliff Hall where the show is held is just within spitting distance from the hotel, which is located on the Leas which is a road/park area on the edge of the cliffs that towers above the beach. Leas Cliff Hall is built in the cliff with the main entrance through the “roof”.

To get to the show we had to que outside. This was not much of a problem since it was warm and sunny outside. But maybe it would be a good idea if the competitors could que separated from those who just want to see the show. With these delicate models one don´t want it to be too crowded.
Classifying and putting my kit, the Strv 103C on display was done without problems. Some however didn´t manage to get the classes straight. I will not name anyone, so you can relax Ulf ;-P
After this it was “money-spending time”.

In the evenings we all again met in the hotel bar. It was crowded with model builders from all over the world. “Everybody” was there. Miguel, Luciano and the other spanish maestros. Jean Baptiste Verlhac, Mirko Bayerl, Gunnar Jansson, Toni Canfora, Ulf Andersson and many many more.. and me…

On monday it was time to go home. Fortunately we didn´t booked an early fight, so we were not n any hurry. We even managed to see a bit of london, which means that we took a walk around the Liverpool Street Station.
When we checked in our luggage we were told to check in both the models and the laptop we used to store the images taken by the digital camera. We were told that there were a separate check in belt for fragile goods. It is supposedly used for cameras and laptops. Well, if anyone uses it they can kiss their fragile stuff goodbye, because when I was going to unload the images from the laptop onto my stationary computer the screen looked like a caleidoscope.

On top of that our flight landed nearly two hours after scheduled.

Finally, did I win anything? Nah, but that´s not the reason I came..

You want to see the competition?

One of the founding fathers of Plastic Warfare, and the creator and administrator of this website.
View all posts by Erik Gustavsson →
This entry was posted in Euromilitaire, Event reports, Gallery. Bookmark the permalink.