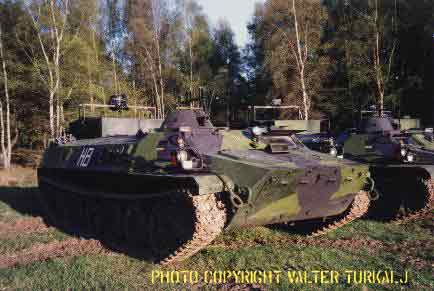 In the mid nineties the swedish army made a find when they bought armoured transport vehicles from old warsaw pact stocks for the price of scrap metal. Among the varous vehicles bought was the MTLB APC. Various members of the MTLB family was bought. The Pansarbandvagn 401 is the “vanilla” MTLB. The vehicles were refurbished and put to service as splinter protected APC´s replacing unarmoured and unarmed trucks as transportation for infantry soldiers.

As of 2010 most Pbv 401’s are scrapped or sold. Many went to the scrapyard still with the protective plastic from the renovation 15 years ago still in place.

One of the founding fathers of Plastic Warfare, and the creator and administrator of this website.
View all posts by Erik Gustavsson →
This entry was posted in Swedish Steel, Walkarounds. Bookmark the permalink.