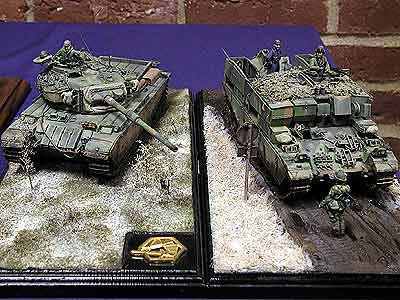 On the 25th -26th of october the C4 Open annual modelling contest was held in Malmö in southern sweden. For the third time Plastic Warfare was there.

C4 Open is a very nice show arranged by very nice people. The atmosphere is very relaxed and friendly. There is also usually a good representation of vendors selling kits, after market stuff and reference litterature. One can also make some findings among the pre-owned stuff sold by modellers who whishes to get rid of parts of their collection. I bought myself an Italeri BMP-1 for example.

On saturday evening there is a gettogether for the vendors and modellers/contest participants where food and beverages are served for a very reasonable fee. At this event the REAL contest is held.. the one that show who the real modeller is..

We brought the camera along, and despite the poor lightning (to be improved for the C4 2003 show I´ve been told) we got quite good results. This is a bit of what was shown:

We strongly recomend this event to anyone interested in modelling. We hope to be visiting the C4 show in 2003.

One of the founding fathers of Plastic Warfare, and the creator and administrator of this website.
View all posts by Erik Gustavsson →
This entry was posted in C4-Open, Event reports, Events. Bookmark the permalink.