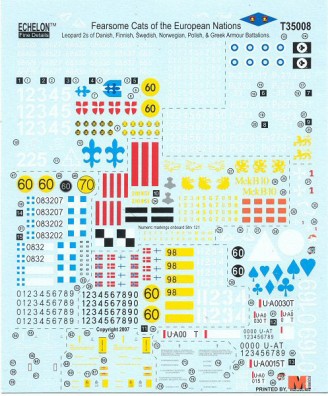 The set has decals for Danish, Finnish, Swedish, Norwegian, Greek and Polish vehicles.
It has options for 15 specific vehicles with markings enough for 6-10 model builds.
The prints looks nice and crisp and the instructions are clear with nice images showing the paint scheme and where to put all the decals.

I can’t say anything about the accuracy of the other nations markings but I’ll write some about the swedish part.

There’s markings for three specific swedish vehicles (strv 121), one from Skaraborgs regemente P4 in Skövde, one from Södermanlands regemente P10 in Strängnäs and one from Norra Skånska regementet P7 in Revinge.
P10 has been disbanded but it’s still nice to be able to build a vehicle from my old regiment (rest in peace)

The vehicle from P4 should be named COUGAR on the side but the name is not included in the set but can be put together using letters from the set T35003. Also the instructions says the registration number for that vehicle is 210907 but it should be 210897.

The most interesting is the markings for the P7 vehicle because it enables you to make a strv 121B.
It has both the Griffons head of P7 and a grey ghost and both those decals can be seen on the side of the turret of the 121B.
What is a strv 121B you might wonder?
It’s a trial for an upgrade of the 121 (Leo2A4) to the standards of the strv 122 (Leo2A5 Improved)
The external changes seen on the strv 121B is Gallix smoke dischargers, tail lights moved up into the rear grille, drivers rear view camera and a new lid for the turret box instead of the tarpaulin.

What Thord doesn't know about modern Swedish armour is not worth knowing. Thord is also known for actually finishing a model once in decade or so.
View all posts by Thord Wedman →
This entry was posted in Reviews. Bookmark the permalink.