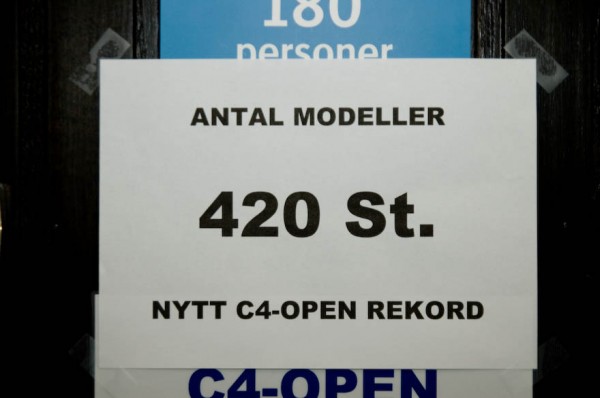 The last weekend of october each year the modelling event C4-open is held in the technical museum of Malmö in the southern part of Sweden. I have said it before, and I say it again, the C4 event is a very nice experience. The C4 organizers show an enormous amount of hospitality, and the event has a very welcoming air.

This year was the first year for my colleague and writer on this site, Thord Wedman. But it is surely not his last. Despite the fact that we worked until 05:00 in the morning on saturday to finish the models we were bringing.

There are a few things that are worthy of an extra mention regarding the exhibition this year. First of all I want to mention the excellent schratch built Stridsvagn 74 by Glenn Persson. It collected a whole bunch of awards, which it was well worth. Second, I have to mention the large armada of large wooden ships. It´s not often I see them on modelling contests, maybe because most contests I am at limit themselves to plastic models. C4 is open to models of any material. Speaking of ships. I don´t think I have seen so many ships on a modelling contest before either.

Without much further ado, here are some images of the event. I hope you´ll enjoy them!