What shall we do with the Hobby Boss Stridsvagn 122?

UPDATE 2008 08 23: Ingvar has been kind to send us photos of the finished model and somewhat larger copies of the images found in the article. You will find the new pictures in the gallery at the bottom of this page.

All builders of Swedish armour were jumping with joy when an injection moulded version of the Swedish main battle tank strv. 122 came out. However, most builders, me included became a bit disappointed when the box was opened as the there are quite a few errors. I would also like to have it a bit more sharply in detail as well. Having already built the Tamiya-HKCW strv 122 I had a few things I would like to improve. Clear vision blocks and better defined anti-slip structure were a few improvements on my list. 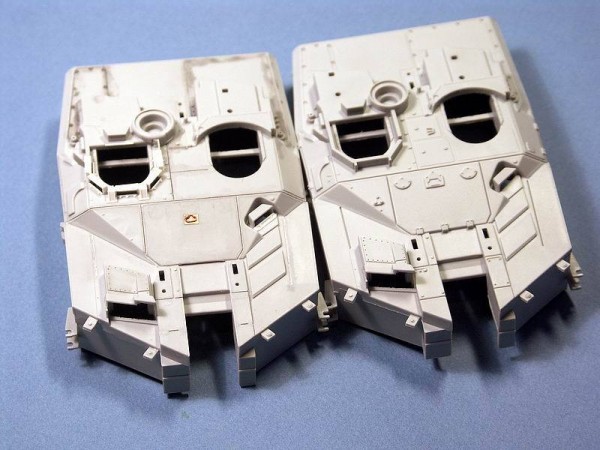 So let’s get started with the turret. On the right you can see the unmodified turret. I have here sanded down the raised portions that are supposed to be anti-slip coated portions.

The next thing I did was to remove the featureless rendition of the commander vision blocks. I made holes for the vision blocks and added the framework from plasticard and added some small bolt heads as well.

And this is how it looks without the modifications above

And this is a front view of the modification.

And the same view before modification.

The top portion of the commander station also needs some modification in order to ensure a snug fit to the turret top.

The modified part seen from below.

And the same part before modification.

The vision blocks was made of 2mm thick acrylic (plexi glass) thinned down to 1.5 mm thickness. As far as I understand, it is possible to view through these vision blocks from the inside before sticking your head over the edge. This is possible by making a counter block like seen in the picture. Please note that I did not care to make the angle part on the inside of the vehicle. I have also tinted the inside part blue-green to give an impression of thick glass.

I have now removed all the parts I found to be wrong or lacking the detail I wished for. It is time for some masking of all the areas that are not to be covered with anti-slip structure.
Please note pie shaped areas on the front surface. These are raised on the Hobby Boss as well as on the HKCW kit. In real life they are surfaces without anti-slip texture, so they really should be recessed. 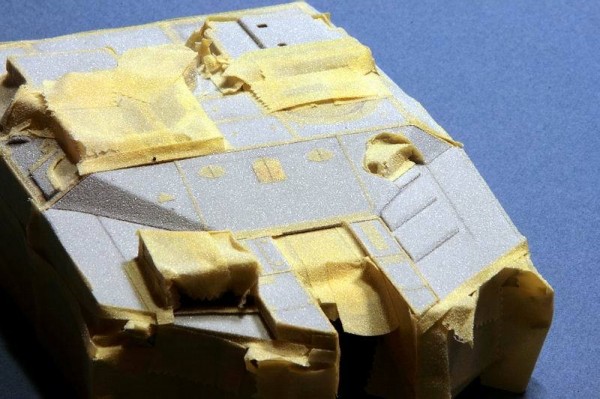 And here I have spray coated the turret with repo spray glue, which is high viscous and permanently sticky. I then sprinkled 70 micrometre particles on top of this and carefully brushed of any loose particles. The idea is that there shall only be one layer of particles, hence the choice of high viscous glue. A thinner glue would be absorbed through capillary effect by the particles and the result would be a very thick layer.

The next step is to install the vision blocks, but before doing that I need to put some paint on since it will be possible to paint the inside once the vision blocks are in place. I also attached the modified top part. You can also start to see the effect of the anti-slip texture and what it does to colours as it reflect light in totally different manner. 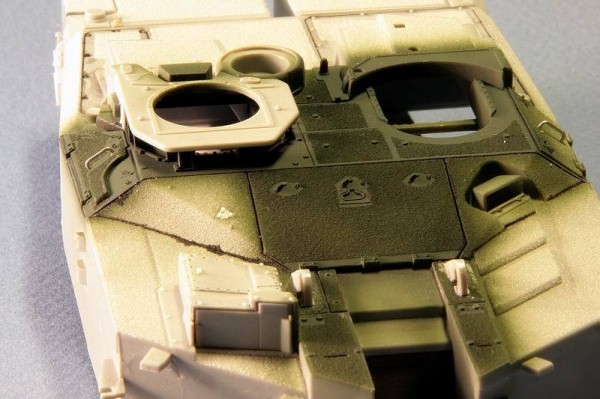 And, another view of the same thing. Here you can also see some home made hinges, as well as the locking levers on the hatches of the turret.

I also assembled and put some detail to the large rear hatches.

The top will receive anti-slip texture as well. I will also add the wires that keep the cap of the launcher tubes in place. 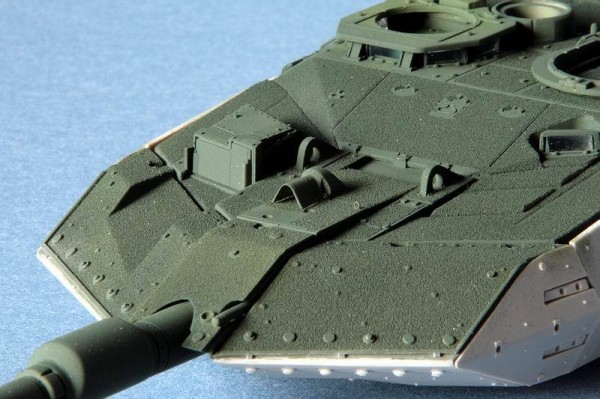 So, now a few more details are in place, like the vision blocks, main gun a lot of bolt heads and so on. Yes, I mostly always paint throughout the building process to be able to get paint in places you can’t reach´. 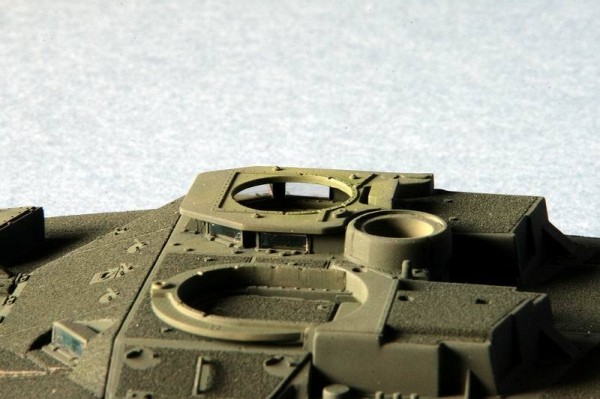 In this picture you can see the effect of the vision blocks described earlier. You can see from the inside out but not from the outside in. 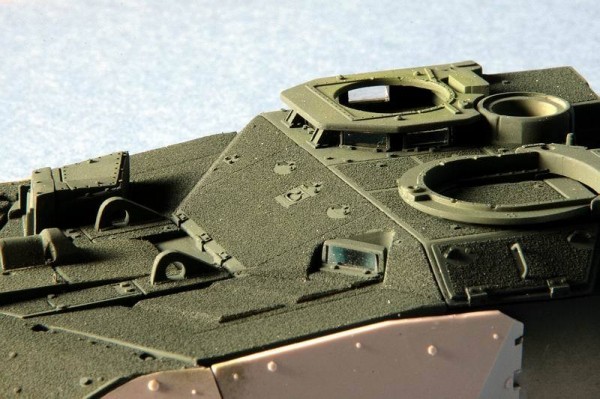 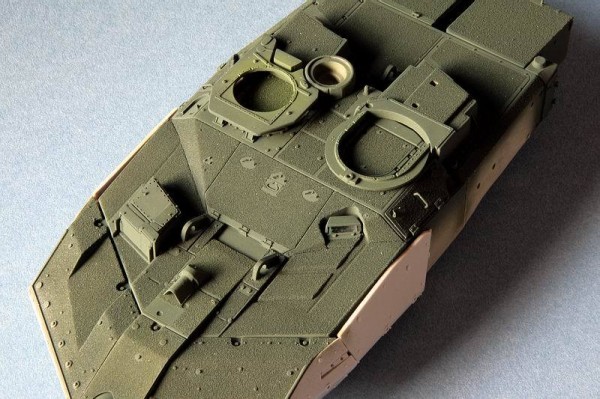 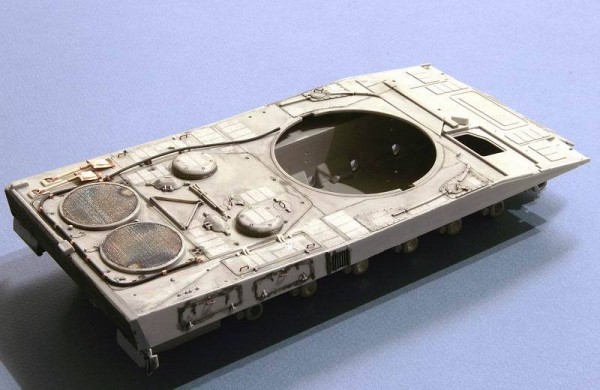 The hull received a similar treatment. First you need to remove all raised anti-slip panels. Some of these are close to one inch thick translated to real life scale. The hull on the left is before modification. The Hobby Boss instruction is a bit wrong as it instructs the builder to install the APU normally found on Danish 122. The kit parts (H2 and H3) are in the kit but needs some attention. A fair amount of putty will have to be used and one hinge on the hatch of part H2 is missing while the other one is in the wrong place. Also the kit screens intended for the cooling vents are wrong. I found a tight mesh suitable for the purpose. I also removed a portion on the intakes (the smaller round objects I front of the cooling vents). The recessed screws all over the hull received some attention with some home made tools. I removed the hydraulic hose on the rear deck as well.

After having removed most things I didn’t like it was again time for some masking.

A close up view. 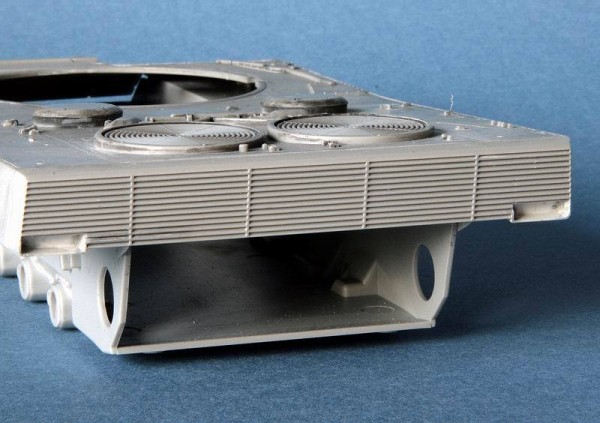 I decided to make vehicle number 122008, which can be found on Prime Portal. I noted that it has differently arranged rear lights, -so why not try to make this?

Here is a comparison view. 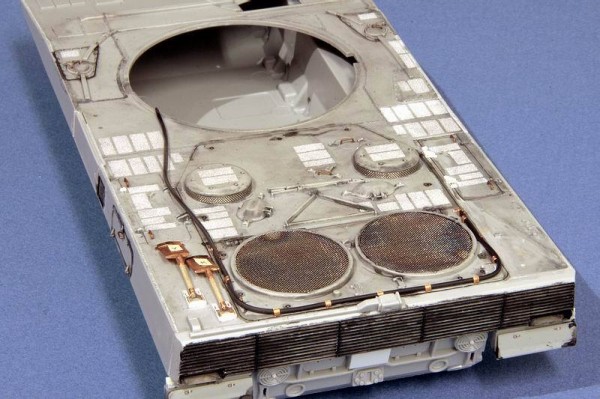 I have here started the detailing of the hull. There are a lot of brackets, handles, screens and stuff. I dry fitted a piece of tubing left over from a Tamiya 1:12 Motorcycle kit, which perfectly fits the dimension of the hydraulic hose. I had to make a couple of shovels as the kit parts left a little to be desired.

And a close up. You can here also see the net on the intakes as well as the holder for the shovels.

And here a few more parts are in place such as towing wire holders and holders for some other tools. Note also the hinges on the hatch above hatch number 2.

One problem with the Hobby Boss kit is that you constantly find things that need serious attention. Kit part D15 is dead wrong and needs to be replaced. You can also see the corrected welds in these pictures.

Another view of the driver’s hatch correction. You will also need to remove the anti-slip panels on the front of the hull as the add on armour (kit part K1) will sit to high otherwise.

Kit part K1 and K10 after some scribing, surface texturing, new bolt heads and so on. I also found that the locating pins on the rear side of part K1 is best removed since they make this part sit to far back.

The kit part K 12 and 13 also needed some attention, here seen with masking before the surface texturing.

And the same part still on the sprue.

I wanted the turn signal to be clear so I casted it of the Tamiya kit where the same part was a left over from the modification process of my previous strv. 122 build.

Below you will find all the images in the article above and the images of the finished model. Just click on any thumbnail to see the picture in a larger format.

This entry was posted in Build blog, Swedish Plastic. Bookmark the permalink.

13 Responses to What shall we do with the Hobby Boss Stridsvagn 122?