Posted on September 27, 2008 by Erik Gustavsson 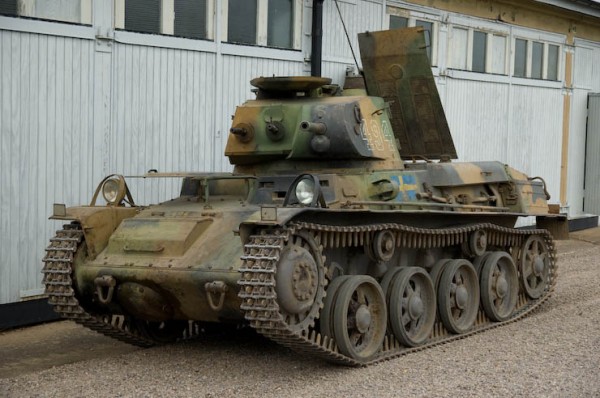 In the late thirties the engineers at the swedish-german firm of Landsverk in Landskrona, Sweden developed a tank of welded construction and torsion bar suspension. It also had a radio and a periscope for the commander. Armed with a Bofors 37mm gun it had a crew of three, Commander, gunner and driver and weighed in at 8,5 metric tonnes.

The swedish army bought 16 in of the type in 1938 and called it the Stridsvagn m/38. The type was also produced under licence in Hungary, where it was called Toldi. It saw service with the hungarian forces during the second world war.

Because of the war there was a great demand for new tanks in the swedish army, whose tank force consisted of the light tank strv m/37, which was armed only with machine guns, and the above mentioned Strv m/38. The Strv m/38 was improved on and 20 new tanks were built by Landsverk as Strv m/39 in 1940-41.

Since there was no way the Landsverk factory could fulfill the demands for new tanks the army ordered TNH tanks from the CKD factory in Prague in 1939. Because of the german occupation the swedish tanks were pressed in to german service where they became the PzKfw 38(t) ausf S. The TNH tank was later produced in sweden under licence from 1941 to 43, and it became Strv m/41.

In Landskrona however the Strv m/39 was further improved on and became the Strv m/40 which was delivered in 1941. The Strv m/40 was equipped with an add-on armour package, that, to save the suspension, was not to be mounted during peace time. Later, in 1944 a second batch was produced in Karlstad. The Landskrona manufactured tanks recieved the letter L, and the Karlstad made vehicles got a K added to the name. The Strv m/40K differed from the Landskrona built tanks in that it had the add on armour package integrated in the construction, and not as removeable panels as the Strv m/40L. To cope with the added weight the 40K got a more powerful engine (162 hp versus 142hp) and a strenghtened suspension. The main armament, the 37mm gun however remained the same, which makes the usefullness of the tank, should sweden have been pulled in to the war, quite questionable. The main gun would have almost no effect on any tank used by the allies or the axis at that time. In Landskrona 100 of the type were built, and in Karlstad the number of built tanks was 80.

The vehicle portrayed in the walk-around below belongs to the armour museum at Axvall, and it is part of their small collection of driveable display vehicles. The photos were taken during an event on the 27th of september 2008. The tank is very weathered, with a very faded, chipped and worn paint job. That is because it has never been repainted. The colours are the same as when it was in active service with the exception of the running gear, which was repainted because the old paint job was in such a bad state that it had to be repainted. But the gray colour is said to be the same as the old one.

The facts are compiled from the website of the armour museum at Axvall and from a conversation with the curator of the museum, Per-Åke Kronbladh. Any factual errors might come from the author of this article however.