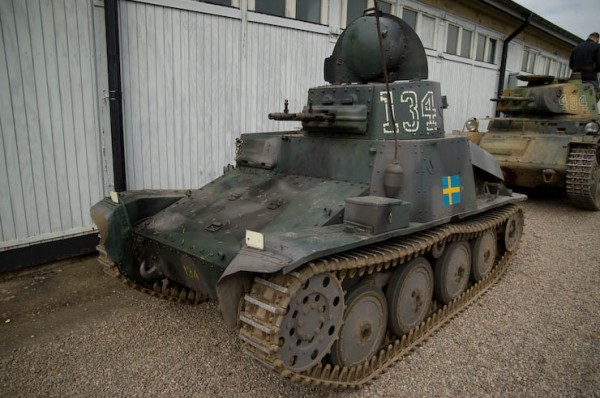 The strv (stridsvagn – “tank”) m/37 was bought from the czech firm of CKD in the later half of the 1930’s. A total of 48 tanks were ordered and all but two were assembled in the swedish town of Oskarshamn by the firm Jungner. The Strv m/37 is based on the widely exported tankette AH-IV, and it’s factory designation is AH-IV-S. Compared to other versions of the AH-IV the Strv m/37 is slightly enlarged (which didn´t help the PW author Thord. When offered the chance to take the Strv m/37 for a spin he had to decline since he couldn’t fit in the drivers position.. he he he). There are a few Strv m/37s remaining today. Four of them are in a running condition, one belongs to the armour museum at Axvall, and it is that one that I have photographed. One strv m/37 was salvaged from a rather poor state and given to a czech museum where it is undergoing restoration.

More information about this small tank is available on the home page of the Axvall Armour museum and their page about the Strv m/37. The page is in swedish only unfortunately. There is also a small book by MBI regarding the Praga export tankettes that contains a lot of information, drawings and pictures of the Strv m/37.

One Response to Stridsvagn m/37