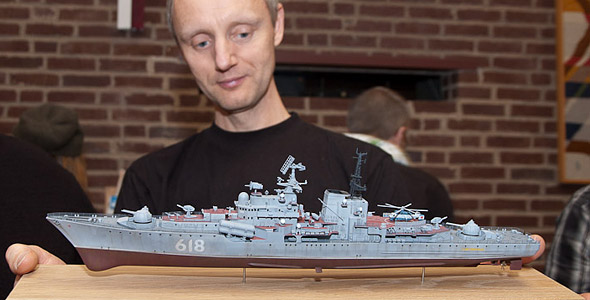 Better late than never? Right?
Anyway, here are some pictures from C4-Open in 2009. I thought it could be nice having them on the site, since C4-Open 2010 is just a few days away.

By the way, that´s Ulf Lundberg and his very nice Sovremenny on the photograph above.

Among the news of C4 2009 was the non-competition Special Interest Group exhibitions. This year the themes exhibited were Swedish armour and Swedish aircraft. This year it´s going to be “Braille scale” (vehicles 1/72nd and 1/76th scale) and Draken aircraft. A good thing the braille scale models are so small, since there will be about 250 models exhibited!

As usual there was a theme class in the competition, and in 2009 the theme was “Sweden during the WW2”, with several war time era vehicles and aircraft exhibited.

This year the themes displayed were Swedish Armour, and Swedish Aircraft. Unfortunately I didn´t manage to take many pictures of the latter, but since I was responsible for the former I took some more of that exhibition.

One of the founding fathers of Plastic Warfare, and the creator and administrator of this website.
View all posts by Erik Gustavsson →
This entry was posted in C4-Open, Events, Gallery. Bookmark the permalink.