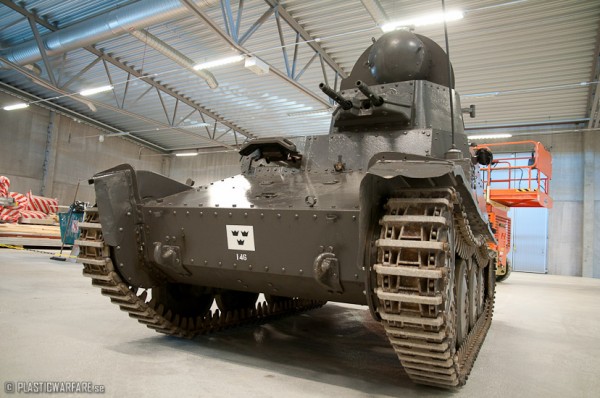 We had the opportunity recently to visit the museum of military vehicles, Arsenalen, that is under construction outside Strängnäs in Sweden.

Arsenalen is replacing two older museums, the armour museum at Axvall, that closed down permanently last summer, and a museum of soft skin military vehicles that was located in Malmköping. The goal is to be able to show the development of military vehicles, armoured and unarmoured, in Sweden and abroad, from the early 20th century, all the way to present time. The goal is to present the collection in a pedagogic and interesting manner, in contrast to the tight side by side parking garage style that was used (by necessity) at Axvall. The new building is large and spacious compared to the tight garages at Axvall, but unfortunately it is not large enough to house all the vehicles from both Malmköping and Axvall, so a lot of work has been done to single out the most interesting vehicles. The vehicles not displayed will however be stored and spared for the future. The museum has a lot of real estate attached to it, and who knows, maybe there will be a second building in the future? Many of us also have hopes of  a terrain driving track for displaying tanks in their right environment once or twice a year.

To try out different ideas of how to exhibit the vehicles, a large model is used. As you will be able to see in the pictures below, it is filled with various 1/35th scale model vehicles. Don´t take the models literally. Most of them are just representations of other vehicles not readily available as model kits. There are a few notable exceptions, one that might surprise a few people when the museum opens in the summer of 2011. We hope to be there then.

Miss the old museum at Axvall? Their site still lives on at the SPHF website: http://www.sphf.se/Axvall/index.htm

One Response to Arsenalen – the new military vehicle museum