New book about the CV 90

Posted on January 1, 2011 by Erik Gustavsson 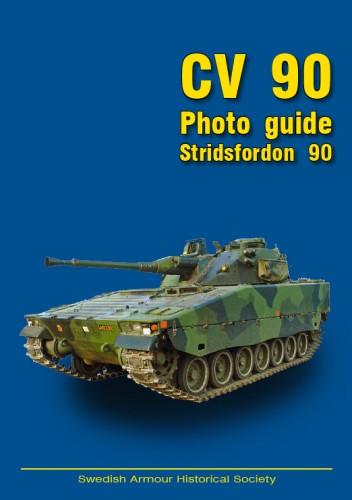 The Swedish association Swedish Armour Historical Society (Svensk PansarHistorisk Förening, SPHF) has now released their book (Our book, I happen to be a member actually..) about the Combat Vehicle 90. The book is follow up on their earlier book about the Strv 103 aka the “S-tank” and follows pretty much the same format.

The book is completely bilingual in the two most important languages on the globe today, Swedish and English. In other words, it’s a good excuse for brushing up your Swedish. It contains 80 pages with mostly colour photos of all the variants from the early testbeds to the next generation vehicles currently undergoing development. Not only Swedish vehicles are represented. Chapters deal with the versions bought by other countries as well, with several pictures of Danish and Norwegian vehicles on duty in Afghanistan.

In addition to the pictures there are excellent 1/35th scale drawings of the major versions in Swedish service, including the Lvkv 9040, which definitively is on my to-do list (will look great between my Gepard and my Sgt York) and colour plates.

Undoubtedly there will be more books on this vehicle now when there is a kit out (and more kits have been announced by Hobby Boss by the way). I´ve heard that Tankograd is about to release one. I haven’t seen the Tankograd book, but I have seen the SPHF book, and I can recommend it to anyone who takes interest in Swedish armour in general and the CV 90 in particular. I AM biased, I admit as much, but don’t take my word for it, see for your self at the SPHF site

One of the founding fathers of Plastic Warfare, and the creator and administrator of this website.
View all posts by Erik Gustavsson →
This entry was posted in News, Reviews, Swedish Steel. Bookmark the permalink.