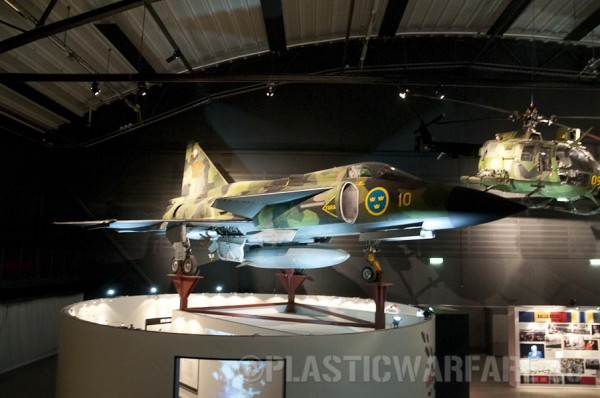 Last weekend I spent an afternoon at the recently rebuilt air force museum in Linköping, Sweden. I thought I’d tell you what I think of the new exhibition.

Earlier in 2010 a  new exhibition hall dedicated to the cold war period was opened, freeing display space in the old exhibition hall from post world war 2 era aircraft. The new building has a basement showing the wreck of a DC-3 that was used by the Swedish intelligence to conduct signals intelligence (SIGINT) from the Soviets by listening to their radio traffic, radar transmissions and so on. This was done by flying an aircraft loaded with listening apparatus in a racetrack pattern up and down the baltic sea, over international waters.

One day the Soviets decided to show the Swedes what they thought of this, and sent a Mig-15 to intercept the DC-3. The Mig downed the DC-3, which hit the water, killing all aboard. When the DC-3 failed to report, the Swedish Airforce started a search and rescue operation which resulted in another Mig-attack, this time on a Catalina used to search for the wreck of the DC-3. The Soviets claimed the Catalina was inside Soviet airspace and that the unarmed Catalina shot first.

The DC-3 was lost for many years, and the details regarding its disapearance was unknown. The Swedish government suspected that it was shot down by the Soviets, who denied everything. When the wreckage finally was found the iron curtain had fallen, and finally the truth could be uncovered.

The basement of the new museum building describes all what became known as the “Catalina-affair” and it displays the wreckage of the DC-3, a Swedish victim of the hotter parts of the cold war.

The upper level is a display of the aircraft used during the cold war era as well as an exhibition of Sweden during the same time frame. The exhibition is divided into four periods, 50’s, 60’s, 70’s and 80’s with matching aircraft.

The new museum exhibition is very pretty to look at. It´s almost like an art exhibition. Unfortunately, in my eyes, herein lies the downside with the new museum. It´s not for rivet counters and aficionados. The museum is designed for people with a laymans interest in aircraft. In the new hall, many of the really interesting aircraft are hung from the ceiling or put high up on a piedestal.

The Spiftire, that was such a sensation when it came to the museum in the 80’s, has been put out of reach and almost out of sight above the large Catalina. Another beautiful aircraft, the Draken, can only be viewed from below. Actually, most post war aircraft are “stashed away” to make room for the general cold war exhibition. The aircraft have become more of a background than the center of attention.

I can only hope that this is a temporary arrangement, and that I and the likes of me will be able to get closer to the really interesting post war era aircraft like Viggen and Draken again some day.