Posted on February 2, 2011 by Erik Gustavsson 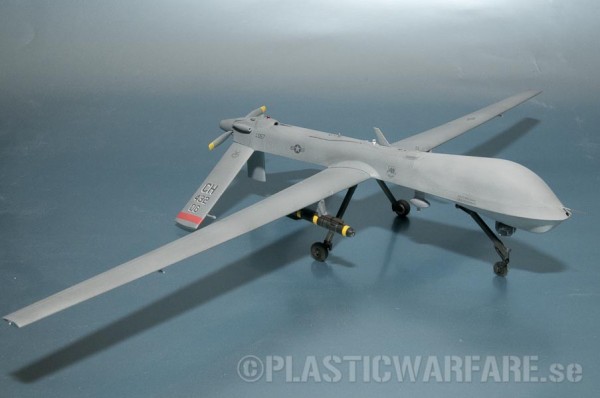 This old classic synth tune pretty much symbolises the modern air war over Iraq and Afghanistan, and probably quite soon also the war on crime over the US and Europe. In 1988 the Belgian synth group Front 242 believed that we would have to wait another 18 years before their vision would become reality. But invisible, silent and instantly checking aircraft guided by silicon brains are already here. They are also very deadly.

The MQ-1 Predator UAV was developed in the 90-ies as an unarmed reconnaissance aircraft. It entered service as the RQ-1 in 1995 and got its baptism of fire in Operation Allied Force over Kosovo. But why just look at the enemy when you can also kill him? In 2001 the Predator was armed with two Hellfire missiles and changed its name from RQ-1 to MQ-1 (R as in Reconnaissance, and M as in Multi Role).

Since the Predator wasn’t designed from the outset to carry armament, the manufacturer, General Atomics went back to the drawingboard and returned with a more powerful big brother, the MQ-9 Reaper… which makes me think of the tune “Don´t fear the Reaper”, but that´s a later project..

The MQ-1 Predator is also available in 1/72 from a manufacturer named Platz. But I am building the Bronco kit in 1/48. The Predator is not a large aircraft, nor does it have any complex details. The kit goes together quite easily, and I managed to watch a rom-com on TV and still finish it in one evening. The nose gear was the only really fiddly part. Well, that and the sensor ball, but the latter would have been easier if I had done some dry fitting and perhaps let the sensor turret off until later. I mean, I didn’t really have to make it “workable”, right?

The prop will also need some more work to fit nicely in the spinner. I used brute force, but you might want to file some, to get a nicer fit and a smaller gap between the fuselage and propeller. I have left the propeller off until painting since I always managed to do more harm than good by trying to make the propeller movable in the good old airfix-days of my youth.

As I said, the nose gear was quite fiddly. The wheel is supposed to be trapped between the two part nose wheel fork. Given that the nose gear is almost the size of a regular 1/72 scale aircraft it requires steady hands, patience and some nasty language.

The main landing gear also reqiures some care. The legs come in two pieces each, and the joint doesn’t seem to be the most sturdy. I hope it will hold. The kit isn´t very heavy after all.

The instructions in my kit had an addendum stapled to it, where the builder is told to put some weight in the nose. I guess this addendum is there for a reason, but the aircraft doesn’t feel like a tail sitter. I put a small roll of solder in there just to be sure.

I left the legs, missiles and the sensor pod off until painting. This is the state of the model after one short evening.

I built this kit while keeping my son company. He started on a Tamiya Abrams he got from his dad forhis birthday. He kind of gave up when he realized that there are 14 road wheels on the tank, and building five of them was quite boring, especially when dad had built almost an entire aircraft during that time.

I started off on the painting part by painting everything with the grey alclad primer. I then painted the aircraft using Tamiya Light gray. I thought it was a fairly good match judging from some photos. Unfortunately it was slightly dark, and when I clear coated everything for the decals, it was way too dark. But I had a plan to save the situation and come out on top. More on that later.

After the clearcoat had about 10 seconds to dry I started adding decals to the aircraft. There are four alternatives in the painting instructions, three American and one Italian. One of the American versions seems to be an early bird, painted in an almost white light gray. It is also a pure recce bird and has a different kind of sensor turret than what I chose to use. The same goes for the Italian drone.

That left me with two remaining alternatives. One quite dull machine marked WA, and one with red stripes marked CH. Actually, I thought about a third option. I’ve seen reference pictures of machines stationed in Iraq, that could be made with the decals in the box. But they are even more boring, lacking any unit markings and totally devoid of anything but a black serial number and the nationality insignia.

So I did what most other builders, whose Predators I´ve seen on the web, have done. I went with the CH bird with the red stripes.

When I was done with the decals (and they had a few minutes to dry) I tried to give the aircraft some washes. The real aircraft is generally pristine- In all photos I´ve seen the aircraft look like they are brand new. In some photos they probably are. Anyway, the reality is boring, so I decided to give the aircraft a slight treatment to some dirt streaks. Unfortunately I didn´t get the wash to dig in to the very petite engraving that represent the joint between the flaps/ailerons and the wing. Nor was the engraving sharp enough to give me a sharp line between the fuselage and the large dome over the satellite antenna, that is situated where normal aircraft have their cockpit.

I let the washes dry overnight (more due to it being late in the evening, rather than out of having to let the paint dry), then it was time for my rescue attempt on the dark shade of grey. My plan was that flat coating would return the grey to its previous lighter shade. But since that was not enough for me I also tinted the flat coat with a few drops of white. This, I thought, should make the aircraft lighter AND make the finish somewhat uneven, making the aircraft a bit more interesting to the eye. The added bonus is that I can add more white to the top and get some sort of shading effect. This worked fairly well I think.

There are not much in the way of details on this kit. The Predator can be built almost like an AFV-model, assembled first, painted last, since there are no interior details, no cockpit, no intakes or after burner cans. The few details there is however screams out to be dealt with, since they add even more interest to the otherwise bland and featureless aircraft.

The details are mostly navigation lights and sensor windows. Also the landing gear can be treated to different shades of black, as the real ones are. I choose to paint the various sensor windows black since I thought it would look at least as good as if I painted the transparent kit part on the inside, and masked the outside. And it would save me the masking trouble. I then covered the windows with tamiya transparent blue in the hope of getting some bluish shade. I also did the same on the small round camera window below the pitot tube in the nose of the aircraft. the position and anti collision lights were treated to first silver, then translucent red and blue paint.

On the photos I found on the net, the launcher rails seems to be olive drab, so I painted them also. I weathered them slightly with a pencil since they look like they are inherited from someplace else (Apache helicopters?). They look a bit more worn than the rest of the aircraft.

This was a nice little kit to build. The lack of a proper cockpit and other super fine details the aircraft modeller is used to makes this kit an excellent starting point for the armour modeller wanting to take on something aeronautic. It gives the modeller an excellent opportunity to practice making bland, grey paintjobs of modern military aircraft interesting to the eye and if ou really want to, there is probably details that can be added to this kit to make it really stand out. If I´d want to superdetail it, I´d look at the brakes for the main landing gear, they can be improved. The pitot tube on the real aircraft has this wind vane on it, which probably could be added as well. A pair of air intakes on the belly, under the engine, could benefit from some carving to make the intake lips thin. There is not much more than that. Perfect if you suffer a hard case of AMS. You could probably actually finish this kit!

The kit does include a pair of wheel chocks, if you place the aircraft on a baseplate. On the decal sheet there are some “Remove Before Flight” flags that could be used for a parked aircraft as well.

Did I learn something from this build? Well, if there is one lession I´d carry with me, it is to CAREFULLY ALIGN PARTS and then glue them down HARD.. see the picture to the left to see what I mean.

One of the founding fathers of Plastic Warfare, and the creator and administrator of this website.
View all posts by Erik Gustavsson →
This entry was posted in Build blog, Finished work, Gallery and tagged 1/48, Bronco, Erik Gustavsson, MQ-1, Plastic kit, Predator, Review, UAV. Bookmark the permalink.