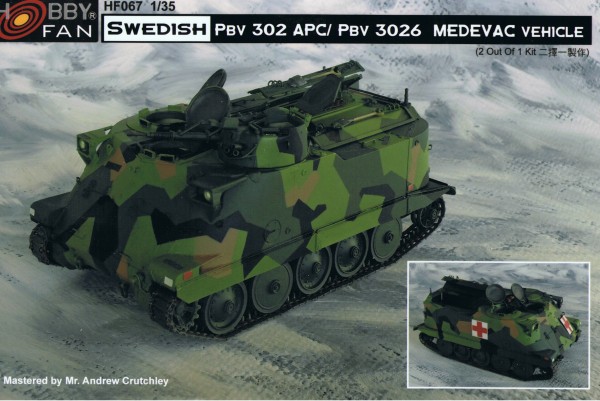 I am still waiting for my copy of the HobbyFan Pbv 302 kit, but some people have more luck than I, and one of these people is Sven Young. Sven has been kind enough to send me some photos of the kit together with some observations regarding it. I have used his pictures and his comments, together with some of my own in an in-box review below.

The kit is moulded with thin walls and all crew and troop hatches are separate. The hatches over the stowage compartments are however moulded on to the hull. It´s not an issue for me, and if you are the type who wants to portray a vehicle with them open I believe you are skilled enough to grind them off and replace them with items made of plasticard or something similar.

There is no interior, but the kit is ready for one, since the hull and turret walls are very thin. There is also a floor with fine anti slip panels moulded on to the lower hull.

Details on the outside are very fine

The tracks are moulded in various lengths, with the parts that go around the idler and drive sprocket already curved, as they are on the IKV 91 kit.

All hatches are detailed on the inside. A strange decision on the part of HobbyFan is that one of the two hatches covering the troop compartment is split in two thus enabling it to be built opened, and the other one is in one part, which means that it can only be built in closed position.

The turret walls are thin, which makes it scream for an interior. However, the gun is missing, only the external barrel is included.

On the other hand, if you place a figure in the turret opening, it will not be possible to see much else.

Also, quite uncommon among resin kits I believe, there is a decal sheet including markings for both the regular Pbv and the ambulance version. It also includes decals for the IKV 91 and the Strv 104 conversions. I didn’t get any decals with my Ikv, but maybe people who ordered it more recently did? If so, please leave a comment below!

Strangely enough the two deflector plates that are used when running the Pbv in the water is missing from the kit. They normally live on the front of the hull, but are just as often missing. If you want those plates they´d be easy to build from a sheet of plasticard I believe. You can see them on Benny Anderssons scratch built Pbv to the left.

Another fine piece of Swedish armour from HobbyFan. I can´t wait until I get my hands on my example.

I believe we might see some Pbv related stuff from HobbyFan again in the future. I sure hope so.

All the photos of the kit

One of the founding fathers of Plastic Warfare, and the creator and administrator of this website.
View all posts by Erik Gustavsson →
This entry was posted in Reviews, Swedish Plastic and tagged 1/35, Hobby Fan, Pbv 302, Resin kit, Review. Bookmark the permalink.