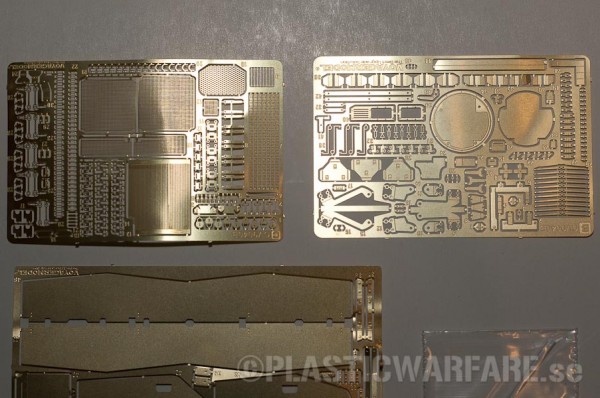 This is a small in-box comparison review of the Voyager Model and KA Models photoetch kits for the Academy Stridsfordon 9040B kit in 1/35. 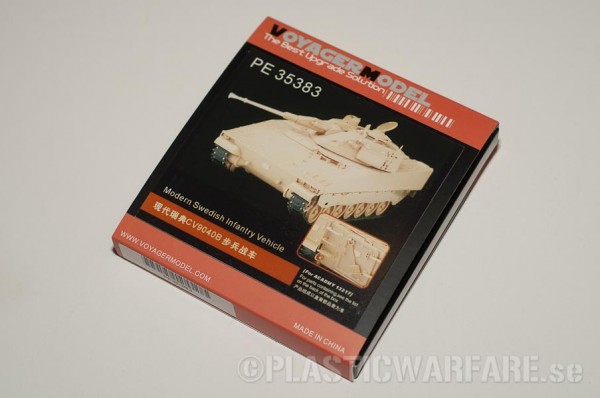 Someone who packed my kit was a bit careless when jamming the frets into the bag, and the result is that a few pieces have been bent, and a pair of them have been damaged, requiring some finesse and tlc when used.

The set contains among other things, meshes for the air intakes on top of the engine and radiators and a mesh for the hot air exhaust to the rear.

Also included are the side skirts and details for them, the thread plates around the crew hatches and also parts for enhancing the interior on the gunners hatch.

Someone handier than me could probably make the side skirts and the rear hatch moveable.

A photoetched sight cover is also included, complete with the tiny hole that enables the use of the sight even when the cover is down. 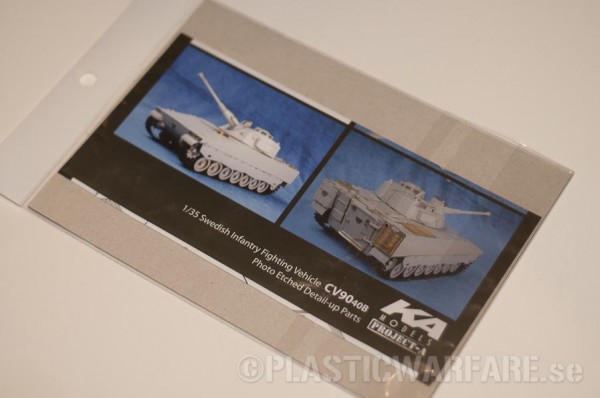 This set comes in a resealable plastic bag similar to the one Eduard sets comes in, but slightly larger. Inside there is a piece of cardboard on which another plastic bag containing the single large fret is taped. Also in the bag is a short length of brass rod. On the opposite side of the fret there is a single folded sheet of paper that contains the instructions.

The large fret has an area that is probably a bit larger than the combined area of the Voyager frets, however it is not packed as dense, thus the number of details you get are fewer.

Some of the details included are unsurprisingly the same as on the Voyager set. The thread plates, and meshes for the various intakes and exhausts. But KA Models has taken a slightly different approach and has included parts allowing you to make the radiator intakes completely out of brass, with the PE mesh covering a PE grille, all inside a PE frame. The exhaust “box” to the rear receives the same treatment. The whole structure can be built as a PE part with a three dimensional grille built from separate parts inside a PE frame. If done properly, this would probably look fantastic, but I don´t think this is for the faint of heart.

Also included in this kit are the two anchors that can be seen strapped to the upper left side of the vehicle. Those are not included in the Voyager set. On the other hand does this set not contain the photo etched side skirts and the myriad of small details that comes with the voyager set.

The set was also bought from Lucky Model and cost me $16.99

A bunch of pictures

The black and white instructions are from the voyager kit, the colour ones, from the KA Models  kit.

Which one would I choose?

If I was to choose between the two kits I’d go for the Voyager kit, but the two sets do complement each other in some respects. But I am not entirely convinced that the anchors and the very complicated radiator intakes/exhausts are worth the trouble. The Voyager set is cheaper, contains more detail and seems to be easier to use. The only downside to the Voyager set is that my sample was slightly damaged.

Thanks for reading this far.

One of the founding fathers of Plastic Warfare, and the creator and administrator of this website.
View all posts by Erik Gustavsson →
This entry was posted in Reviews, Swedish Plastic. Bookmark the permalink.