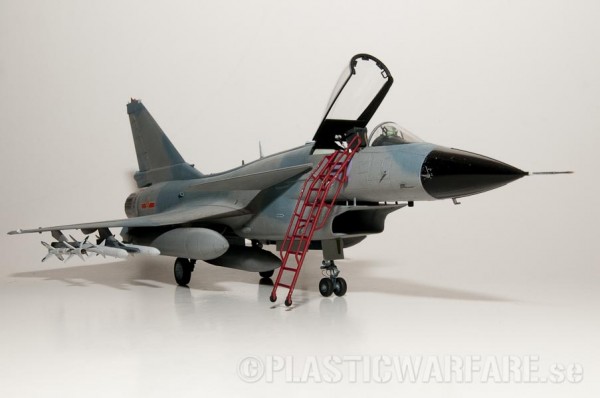 This was my first 1/48th scale aircraft in modern time. I think the last aircraft I built in this scale was the Esci F-16 that came complete with a ground crew and ground equipment. A kit I remember saving my pocket money to be able to buy. It was a bit more expensive than the Italeri 1/72 aircraft I usually bought.

Anyway, this is the Bronco kit of the Chinese fighter J-10 Vigorous Dragon. It´s a beautiful looking aircraft, which was the prime reason I picked it up. The aircraft looks like a very nice blend of the SAAB JAS 39 Gripen, the Eurofighter Typhoon II and the Lockheed Martin F-16. Some sources claim that the J-10 is heavily based on the blueprints of the IAI Lavi, an israeli project that was cancelled in the 1980s.

The kit went together quite nicely. There were some need for puttying around the intake area, but that was expected. The kit included a small fret of photo etched parts like seat harness and HUD frame. Also included was a turned brass pitot tube. I have come to like the turned pitot tube a lot during construction and handling of the aircraft. I’ve been constandly bumping it in to stuff, so if it had been plastic it would have been broken many times over.

I built the kit almost straight out of the box. The only thing I added was some brake lines on the landing gears.

Anyway, it´s a good looking aircraft, and now I have to build all the modern “Eurocanards” just for a comparison. They all currently live in my closet, waiting to be built.

One of the founding fathers of Plastic Warfare, and the creator and administrator of this website.
View all posts by Erik Gustavsson →
This entry was posted in Finished work, Gallery and tagged 1/48, Aircraft, Bronco, China, Erik Gustavsson, J-10A, Plastic kit. Bookmark the permalink.