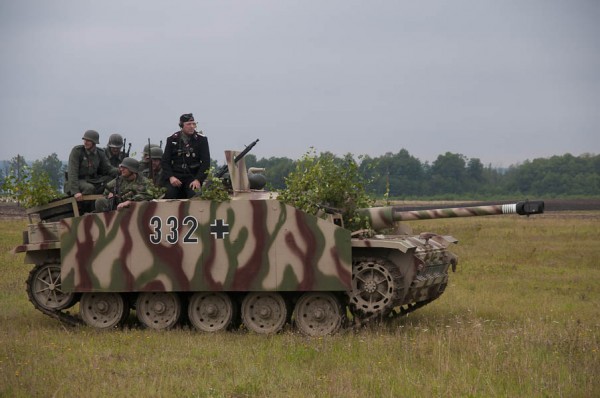 Mölleröd is a small place just outside the small city of Hässleholm, located in the southern part of Sweden called Skåne (Scania).

Every year, the museum in Hässleholm arranges a theme day for us who have a special place in the heart for militaria and military vehicles. This was the first year I attended. On the program was a drive by with various historical military vehicles. The vehicles come from various places, with some of the old Swedish ones, from the Hässleholm museum. The other comes from various collectors who contributes to the show.

Aside from the vehicles themselves, there was a reenactment display with a fight between Wehrmacht and Red Army forces and a small air display of a 2/3rd scale ultralight Fiesler Storch look-alike. It flew just as I imagine a real Storch would fly, with very short landing and take off runs, and incredibly slow flying.

Among the more down to earth displays were a group of RC-tank nuts, who showed off their small vehicles in small battles in a 1/16th scale plywood village. Speaking of small tanks, my friends who organise the C4 competition was also there, displaying the model building hobby. Next to the C4-guys were the representatives from SPHF.

In addition to the various displays there were militaria salesmen selling uniform clothing, helmets, gasmasks and other stuff. The local National Guard detachment (Hemvärnet) was catering for the lunch, with a large “gulashkanone” boiling the classic Swedish army cuisine of pea soup.

According to the more experienced show goers, the show this year was a lot smaller than it use to be. Several vehicles which have been at the show previously was sadly lacking. But I still had a great time. I met old friends and made friends with a few others. I will definitively be back another year.

If you want to use the pictures below as references for a modelling, please keep in mind that some of the vehicles are replicas and “move prop look alikes”. The Stug for example is a modified FV 432. Others are modified by their civillian owners to conform to traffic regulations or for any other reason.

One of the founding fathers of Plastic Warfare, and the creator and administrator of this website.
View all posts by Erik Gustavsson →
This entry was posted in Events and tagged Armor, Armour, Events, Mölleröd. Bookmark the permalink.