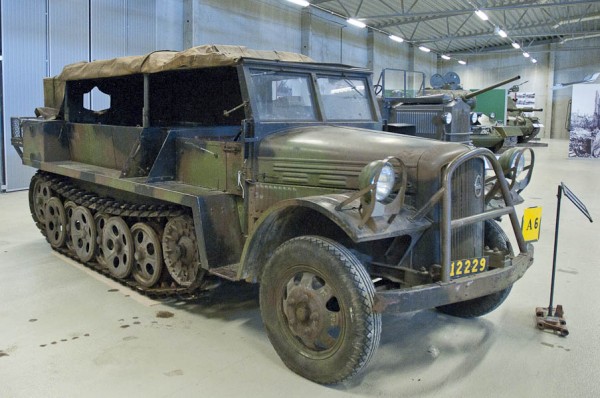 The Artilleritraktor m/43, or Volvo HBT (HalvBandTraktor) as it is also known, was used by the artillery as a tractor to pull Haubits m/39 or m/40.

In 1942 Volvo was tasked with designing a slightly larger and heavier version of the Arttrak m/40 (a.k.a Sd. Kfz 10, made by Demag). As the name implies it was delivered in 1944-1943. Despite its close resemblance to its german cousin, the only parts they had in common were the track links.

108 Arttrak m/43 was made and they were used until 1955-1956. The remaining HBT´s were sold of to scrap dealers, some elded up in Bolivia and some were rebuilt as tow tractors for the air force by cutting the vehicle aft of the drivers cabin and replacing the tracks with a large wheel instead.

This example was photographed at the swedish military vehicles museum Arsenalen. The sign “A6” implies that this vehicle once belonged to the artillery regiment at Jönköping. I don´t know if this is the correct markings for this vehicle, but it was a part of the A6 museum before that museum was closed.

One of the founding fathers of Plastic Warfare, and the creator and administrator of this website.
View all posts by Erik Gustavsson →
This entry was posted in Swedish Steel, Walkarounds and tagged Arttrak m/43, Volvo HBT. Bookmark the permalink.