Posted on September 23, 2011 by Erik Gustavsson 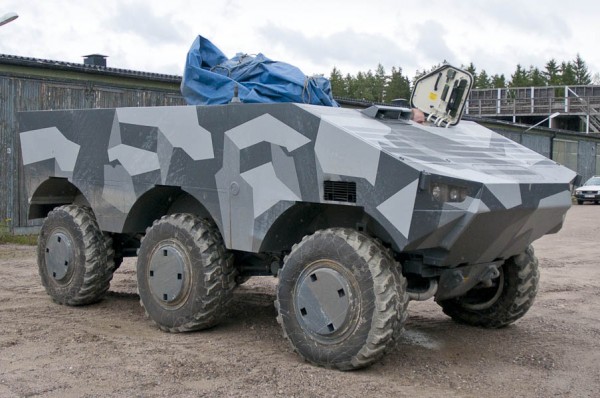 The SEP was to be a family of armoured vehicles, developed by BAE Systems Hägglunds. From the beginning, two versions were envisioned, one fitted with tracks, the other with six wheels. Both platforms were to use a common role module, that could be switched between vehicles for rapid change of role. The platforms were also to use common components where possible.

The basic vehicle was to be air transportable in a C-130 Hercules. It was then supposed to be up armoured in-theatre using modular armour kits.

Everything about the SEP was to be new and revolutionizing. The propulsion was supposed to be diesel-electric, where two diesel engines were coupled to one generator each. The generator fed a bank of batteries, which in turn fed electric motors that propelled the vehicle. The tracked version used two motors, the wheeled version had a motor in each wheel. The wheels were attached to the hull using a hydropneumatic suspension system, which could be used to lower or rise the vehicle. The first and last pair of wheels were steerable, and both the tracked and wheeled vehicles could turn around their on axis. 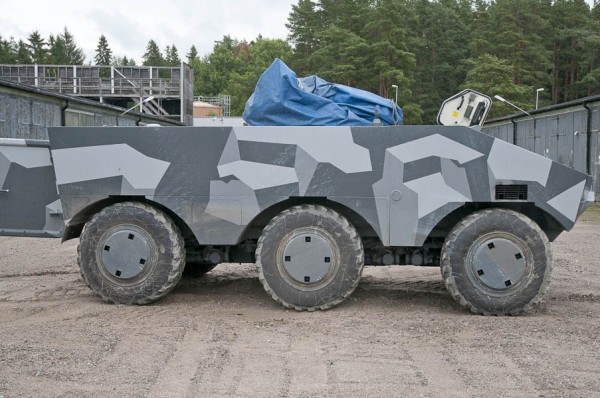 The suspension at its lowest setting 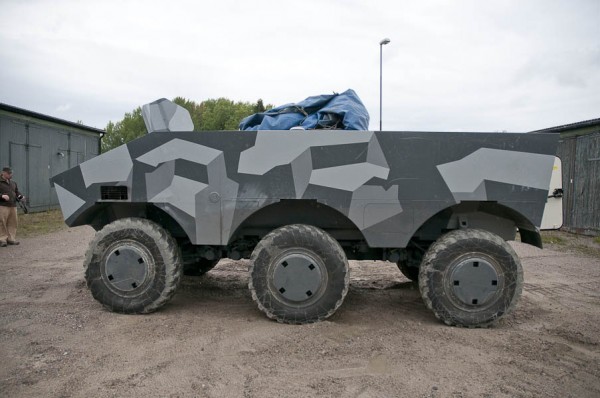 Another revolutionizing idea tested on the SEP prototypes were the use of cameras instead of periscopes for driving, altough the wheeled prototype in this article used regular periscopes. There will be a walk-around of a tracked prototype featuring this camera system later.

The development of SEP started in 1998 with financial support from the Swedish government with the replacement of a wide variety of armoured and soft skin vehicles in mind. Unfortunately the continuation of government support of the project was tied to the possibility of finding foreign customers to share the costs with. As the SEP failed to be selected for the UK FRES project in 2006, the Swedish governmental interest in the project diminished.

To appeal to both the UK and the Swedish government, BAE Systems Hägglunds produced wheeled prototypes based on more conventional technology, to lessen the development costs and the technological risks. Unfortunately this did not help, and the FRES order went to General Dynamics and the Piranha V, and the Swedish government decided in 2009 to buy the Finnish vehicle, Patria AMV (As the Patgb 360A) of which the first vehicles will be delivered in 2012. In response to the failed orders, BAE Hägglunds ended the project in 2010, and had to lay off a large percentage of its work force involved in the project.

Featured in this article is the first of several wheeled prototypes. It had the diesel electric propulsion, with two engines (@ 270 hp) mounted above the front wheels, coupled to two generators. It can be driven in “stealth mode” on battery power alone on short distances.
The suspension can be raised or lowered, and the third axle is identical to the first, and is steerable. Since it is a prototype, there is no armament, but the finished basic vehicle was to be fitted with a overhead weapons station. From the beginning thought to be a Bofors Lemur OWS, but since the Swedish armed forces has standardised their OWS to the Kongsberg Protector, I suppose that would have been the final choice, as it is going to be fitted to the AMV.

A walk around of the T1 tracked prototype can be found here.