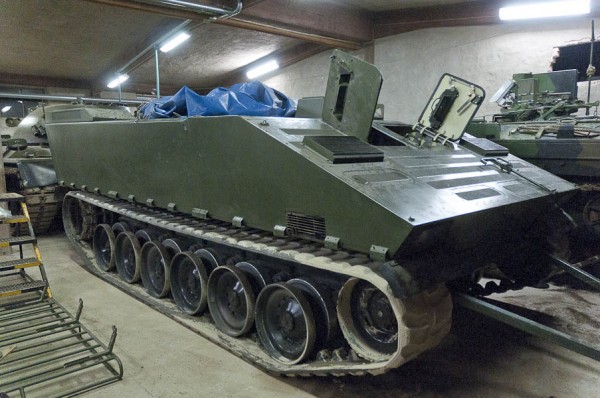 Earlier we took a look at the first wheeled prototype of the SEP concept developed by BAE Systems Hägglunds. This time we take a look at the first tracked prototype. One feature of this vehicle is that it is equipped with six cameras, providing 360 degree coverage. The view from these cameras are presented on the five large multi functional displays in the “cockpit”. As a backup there are one periscope in each hatch. The tracks are single piece endless rubber tracks, and the road wheels are rubberless. The drive sprockets seems to be mounted at the rear, instead of to the front, as is usual on an AFV. Unfortunately I don´t know much about this vehicle, but I suspect that the drive line is similar to the SEP W1 in that it features two diesel engines that turns generators that provide current for electric motors that drives the sprockets. Since the only connection needed between the generators and the electric motors are electric cables, it is not more complicated putting the drive sprockets to the rear, than putting them at the front.

As can be seen at the front headlights, this vehicle has been painted blue earlier in it´s career, and carried the nickname “Blå lådan” (the Blue Box). Pictures of the vehicle painted blue can be found on Prime Portal, where also the SEP W1 can be found, painted light grey.