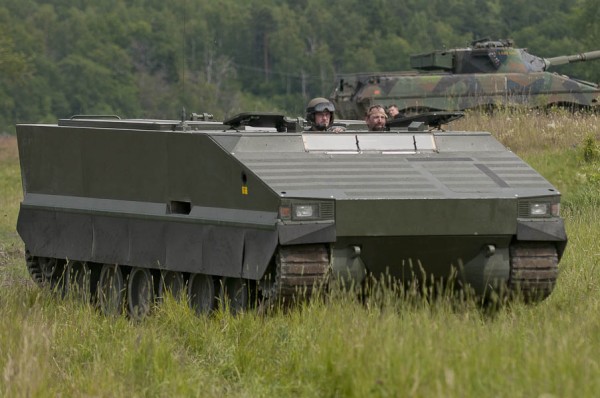 This is the final (for now) walkaround of SEP-prototypes. I don´t have any more SEP pictures now, so until Arsenalen gets a fourth SEP vehicle you can rest assured that you don´t have to see any more of these vehicles.

This is the second of the tracked SEP prototypes, built by Hägglunds for the SEP project. It is the only one of the three SEP prototypes that Arsenalen has in its collection that is currently displayed in the museum.

Compared to the first tracked prototype, this is slightly simpler. It lacks the advanced camera system of the former, and the “cockpit” only has two LCD displays instead of the five MFD-type displays of the older prototype. The drive sprocket has been moved to the front as on most IFV´s. I don´t know why, and I don´t know a great deal of this vehicle other than it is powered by two diesel engines (from Audi, if my info is correct) that via generators powers the electric drive motors. This vehicle apparently share some components with the Strf 90, and also the wheeled prototype.

One of the founding fathers of Plastic Warfare, and the creator and administrator of this website.
View all posts by Erik Gustavsson →
This entry was posted in Swedish Steel, Walkarounds and tagged Arsenalen, Hägglunds, Prototype, SEP, Tracked. Bookmark the permalink.