Posted on January 8, 2012 by Erik Gustavsson 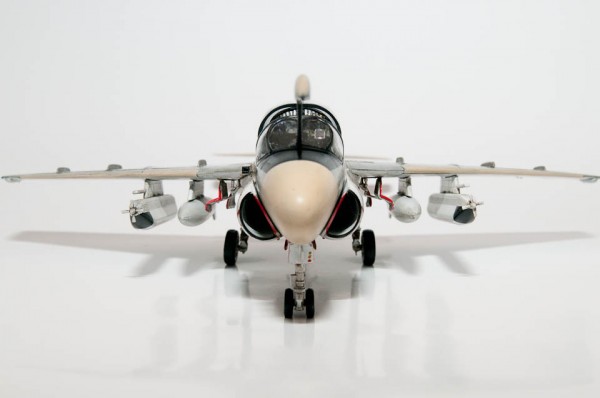 This is Fujimis EA-6A “Electric Intruder” in 1/72. It´s built out of the box, as a companion project to keep my son company. It´s built quite fast, which shows, but I am happy how the weathering and colour scheme turned out. 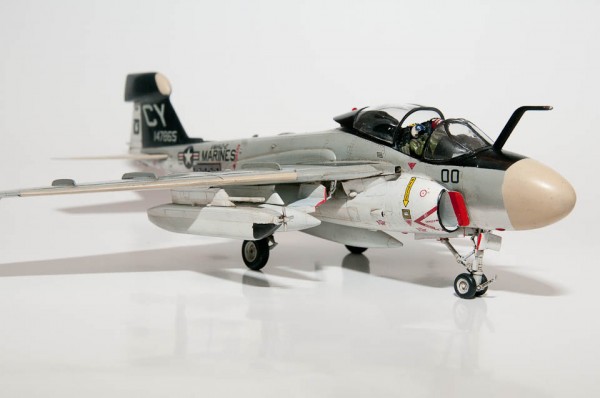 Short background about the EA-6A

Many are familiar with the A-6 Intruder attack aircraft, many also know about the larger, four seat electronic warfare version, the EA-6B Prowler. Fewer know there was a stop gap aircraft developed in the early sixties, and used in front line service until the mid seventies, before the Prowler was available. This was the EA-6A. It retained the fuselage of the Intruder, and the external differences are, apart from the “football” at the fin top, few  and not easily distinguished. Apart from antennas and the odd additional scoop, the “Electric Intruder” retains the fuselage mounted air brakes of very early Intruders. On regular intruders these were moved to the wing tips instead, but for some reason, they had to remain on the fuselage on the EA-6A. Also on the wings, there is an extra wing fence. The nose is slightly also slightly longer. 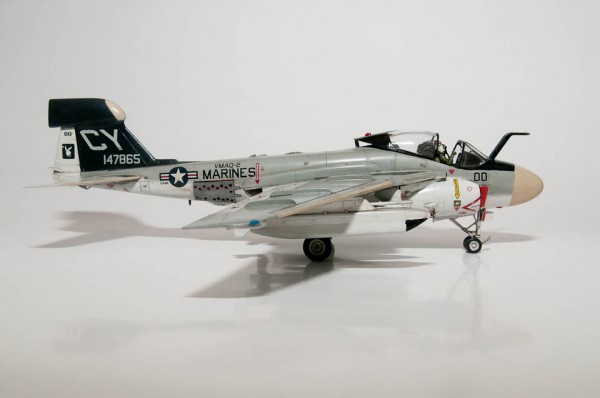 The Fujimi EA-6A Intruder kit is far from brand new. It´s from the early nineties at least, maybe older. But the details are crisp, the panel lines finely engraved. The Intruder fuselage is more complex than I knew when I started this build, and the complex lines demand that the fuselage is split up in several ways.The fit is however quite good. There are some lines that need puttying, or at least careful alignment and sanding. 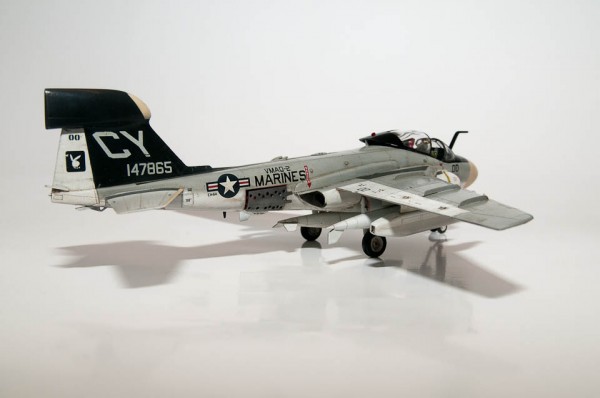 The kit includes the two S-shaped ducts for the exhausts, with turbine blade faces to place at the ends (they will not be visible afterwards). There are also fans and ducts for the intakes. If you want seamless intakes, I guess it´s doable, but it will require a bit more effort than what I put in. It´s also not a very easy area to get to – it´s 1/72, remember!

The intakes will as usual, need a little sanding, but careful alignment reduces this to a minimum. The nose cone will need a bit more, and some puttying too maybe. I was a bit sloppy, and just used my scalpel blade, but unfortunately it shows after painting. The nose cone on my sample had only traces of panel lines on it, so the serious modeller want to scribe some lines here. Also missing from the nose area, are the various pitot tubes. They are not in the kit. The kit does however tell you to remove the fairings for the wing tip air brake jacks, and it gives you the extra wing fences. Also in the kit are the perforated fuselage mounted air brakes. The builder is told to open up the openings for the hinges, since the moulding is tooled to incorporate many different Intruders. The air brakes perforations are portrayed with sharp indentations in the plastic. I elected to do the only “superdetailling” by drilling these out completely. During the process I managed to ruin one of the brakes when drilling out a hole close to the corner. The corner simply gave away. I managed to repair it using plasticard and superglue. 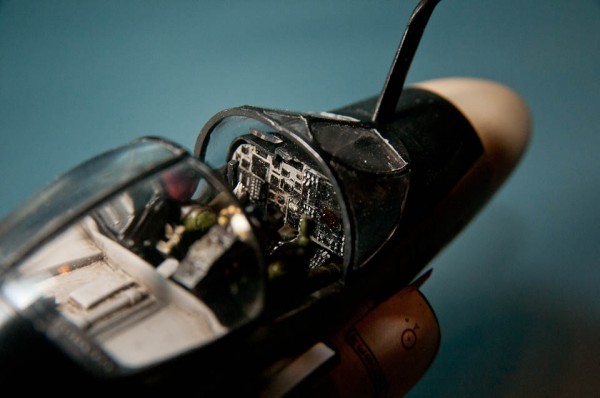 The kit gives you decals for the cockpit, but the instrument panels features fine raised details, so I elected to paint them on instead. I was quite happy how it turned out. The seats are also fairly detailed. I am no expert on the Martin Baker Mk 7 used in the Intruder, but the amount of details on them (including moulded on harnesses) are OK considered the scale. Two detailed pilot figures are included, and I gave them the imaginary callsigns “Stars” and “Stripes”. 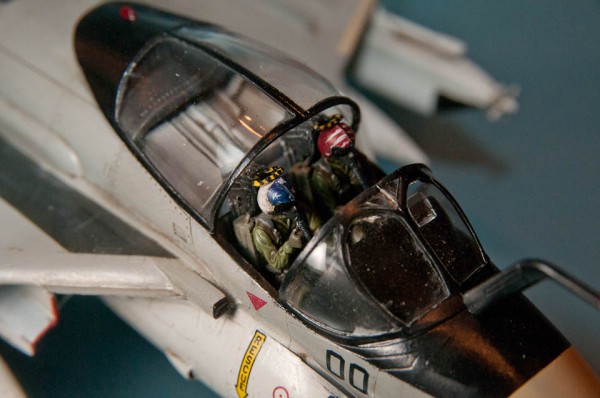 The canopy can be positioned either closed or open. It´s thin and clear, and even if it´s closed, it will allow quite a good view in to the cockpit. However, it has a fair amount of distortion. The fit is excellent, even when the canopy is closed. I think it should be slightly more bulged on the sides to be 100% correct, but moulding limitations would make that a complicated affair. When this kit was issued, use of slide moulding was not as common place as it is today. 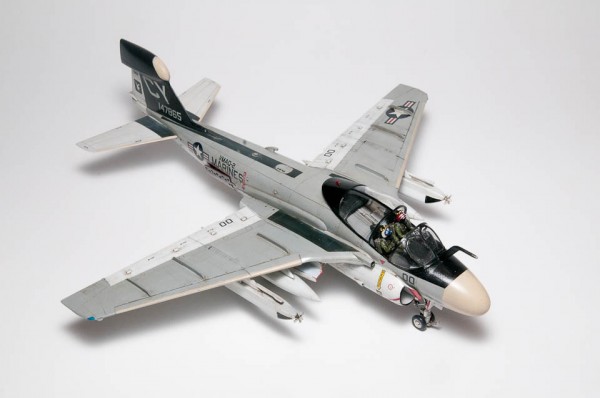 The included load consists of three fuel tanks and two jamming pods. There is also an extra pair of wing pylons to be placed on the most outboard station, but there is nothing to put on them.

You get four different options when it comes to markings, three high visibility gloss grey/white schemes, and one low visibility grey. I selected the box art alternative of VMAQ-2 of the USMC. They wore the name “The Playboys” and displayed the classic playboy bunny on the aircraft back in the days. I thought the black fin with white lettering would look good.

The paint job was fairly simple. I first gave the aircraft a base coat of alclad microfiller primer. Then I started off with the radome tan on the nose, since it often is easier to mask the nose than to mask the fuselage. The under side (complete with landing gears and landing gear bay doors) was painted white. I then masked the tail and added the black , since I thought it would be easier to mask the fin rather than the tail later. I found a suitable grey among my tamiya jars. It was not as tricky as I hade thought, getting a fine demarcation between the white and the grey using free hand painting with the airbrush. 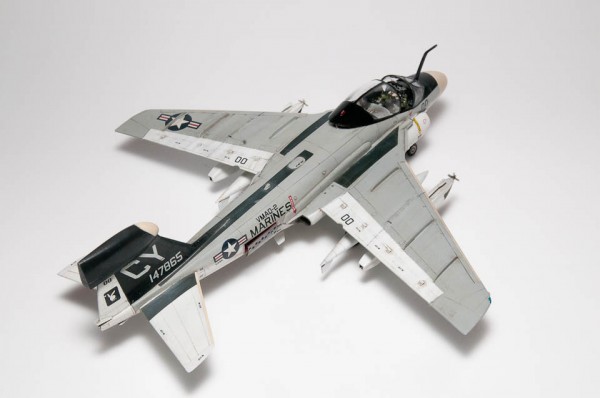 Painted the walk ways and black trim around the canopy instead of using the kit decals, I thought it would be simpler and better just to paint, and the walkways were added using flat black (Tamiya “NATO Black”) for two more reasons, the first being that on photographs of this particular aircraft, the walkways are indeed black instead of the greya of the kit decals, and by painting the walkways AFTER the decals were added and gloss coated, they remained flat. The weathering process have resulted in them being not as flat as I´d like, but there is still a little difference compared to the surrounding semi gloss surface.

The decals were the only serious let down of the kit, but this probably has more to do with the age of the kit, and not so much to do with the manufacturer. The decals were packaged with a piece of protective paper in a separate plastic wrap. The paper had become attached to the decals and required a bit of carefully applied force to remove. The result was that some decals on which it had stuck, had a “fur” of paper fibres. I thought that it would come off when the decals had been soaked- and it did, but not easily. The other problem with the decals was that they were brittle and prone do break. Both problems I guess is due to the age of the kit. Apart from those two problems, they were thin and reacted well to microsol. They are not as sharp as we´re used to nowadays, but I guess that is also a sign of the age of the kit.

After the decals had been applied, a protective coat of gloss coat was added. Then it was time for weathering. I wanted to make this aircraft “new but worn”, so I did not add any patches, chipping or paint touch ups. I begun by adding a wash to the aircraft. For the first time I used a ready made wash – from AK Interactive. I bought the wash for another project (it´s “For green vehicles”), and it´s a dark brown colour. I thought it would work for this grey/white aircraft also. Compared to the home made washes I’ve made before, this one is very dark, but fine. I´ve had problems with my own washes, that it has been very “grainy”. I don´t know if it´s the pigments of the oil paint or humbrol or if it is the solvent, white spirit that is the culprit. The AK wash is completely “grain free”. I added the wash very liberally, allowed it a few seconds to dry (I like the weathering process, it´s the really fun part of any modelling project, so I can´t sit around wait for stuff to dry.. unfortunately). Then I used brushes moist with white spirit, cotton buds and a rag to clean the aircraft up again, so that most of the wash only remained in the panel lines. After that I used oil paint (black and brown) to add streaks to the bottom, where I imagine oil and fuel would seep out through leaks in the panel lines. I also added a few streaks over the wings, where grease and oil leaks out from the actuators for the flaps.

It´s a simple build, and a simple weathering job, but I think it came out nicely. Probably the nicest 1/72 aircraft job I’ve done, ever.

One of the founding fathers of Plastic Warfare, and the creator and administrator of this website.
View all posts by Erik Gustavsson →
This entry was posted in Finished work, Gallery, Reviews and tagged 1/72, Aircraft, EA-6A, Erik Gustavsson, Fujimi, Intruder, Plastic kit, Review, weathering. Bookmark the permalink.