Posted on January 4, 2012 by Erik Gustavsson 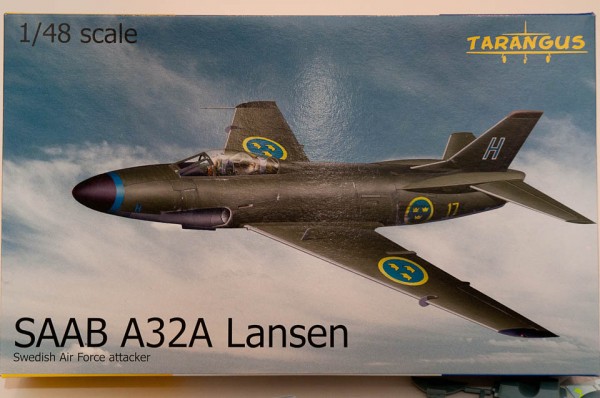 Finally it arrived, after more than a year since we first heard of it, the Tarangus 1/48 scale SAAB A32 Lansen. The kit is a limited edition injection moulded plastic kit with five grey plastic sprues, one transparent plastic sprue and two ejection seats in resin. The kit comes in a sturdy card board box featuring a very nice box art. The box has all the parts placed in a single large ziploc bag. Fortunately the transparent sprue is placed within a smaller ziploc, so it is protected from scratches.
Two sheets of decals are included, one main sheet and an addendum with a second set of crown markings. The colours of the crown markings differs between the sets, and the addendum sheet is probably closer to the real colours. I think both sets are usable, but for the really picky it could be worth knowing. 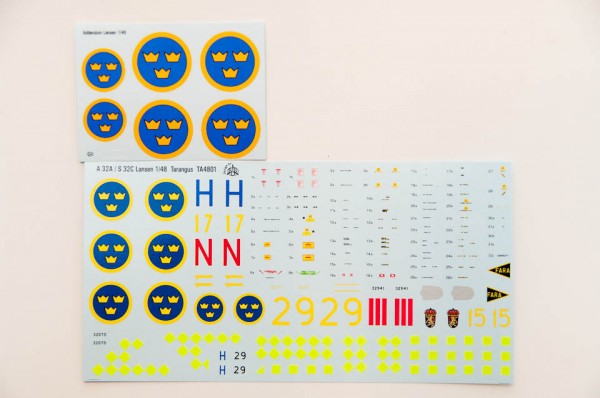 Speaking of the decal sheet, the main sheet holds a lot of stencils and Ö68 squares. The Ö68 squares were markings put on aircraft playing the enemy in exercises, and they have been known to come in two colours, dayglo red or dayglo yellow. On the decal sheet the Ö68 squares are really glowing yellow. It will make the finished kit a real eye catcher I think.

The stencilling is probably as complete as it can be, with variations for early and late markings. They are in register, and the film looks thin. I have seen crisper decals. It is not possible to read the small stencilling. But I think they will do nicely. If not, there are already after market sets on the market.

The parts come on six sprues, five grey and one transparent. This is a short run injection moulded kit, and it cannot be expected to have the same quality as any other contemporary kit from Hasegawa or Tamiya. But as short run kits go, this kit is quite good, as far as my experience goes. Actually, I´ve seen fairly new Airfix kit that looks worse (yes, I´m talking to you, Airfix 1/48 TSR.2 kit). There are no part numbers on the sprues, but there is a guide in the instructions booklet.

The engraving for the gun fairings is missing

The main fuselage parts have engraved panel lines, not as finely engraved as some manufacturers manage to do, but also not the heavy ditches from some other (still talking to you, Airfix). I´d say that they are nothing to be worried about. I have not compared the panel lines to any drawings in order so spot any errors, but I did found a spot that needs some work. The guns, ore more exactly the lack of them. On the A32, the four 20mm gun barrels are covered with small aerodynamic hatches. These look like four rectangular panels in lower nose. These are sadly lacking on the kit. Not to hard to fix if you know how to scribe. I am unfortunately not good at rescribing, but I´ll have to give it a try this time.

Also on the fuselage there are two air intakes and a few other details that will benefit from some drilling and carving.

When it comes to the details the kit is quite simple. There are almost no details in the gear wells, and the detailing in the cockpit is also spartan. If I remember correctly, the interior in the Lansen IS quite spartan to begin with, but I think the after market companies or scratch builders will have the opportunity to shine.

The kit comes with 14 weapon pylons, but sadly enough, no weapons. They will undoubtedly turn up from Maestro later. I believe, but I am not sure, that 12 of the pylons are so called A-pylons, that could be used only for rockets and light bombs, six pylons on each wing. There are two optional pylons included, to be used instead of the most outboars A-pylon, but if this is a so called B-pylon for heavier bombs, I don´t know. The instructions just give you the option, no information. There is no center mounted D-pylon includen, neither are the G-pylons used for the Rb 04 anti shipping missile included.

There are ejection pin marks on many parts, but they are with a pair exceptions placed where they do no harm. Often they are of the protruding variety, to they can be cut and sanded away. One exception is a pin mark on the main landing gear bay. It might need some work to get rid of.

I found no sink marks on any parts and only a small amount of flash.

The clear parts are very clear and reasonably thin. Thin enough for the canopy. The gun sight and perspex parts for the ejeciton seats might benefit from being replaced by parts cut out from transparent plasticard.

The seats are moulded in resin, and my seats did not have any air bubbles in them. The Lansen bang seats are quite simple and basic in design, and this goes for the resin seats too. They are depicted without the survival pack/seat “pillow” and the parachute/”back cushion”. There are also no belts present. Also missing are the foot rests and the ejection handle. Those two details are not too difficult to add yourself.

The instructions come in the form of an black and white A4 booklet printed on a good quality paper. It has a very nice feel to it.

The illustrations are clear and contain colour call outs that are quite thorough regarding to what colour goes where. The description of the colour is however generic, and no paint manufacturers numbers or FS numbers are given. To be honest I think the call outs are specific enough, so it doesn´t bother me.

There is one think I would have liked to see in the instructions, and that is a guide for which pylons that were used for carriage of what weapon. The instructions give you a drawing of the A/C with all pylons mounted and a rocket on each pylon, but it would have been nice to see what alternatives there were. As previously mentioned, different loads used different pylons, and not all pylons were always mounted.

There are two alternatives regarding markings included. Both alternatives are olive green aircrafts with natural metal undersides. Here the instructions give the modeller a suggested FS-number (FS34079) as well as Tamiya (XF-61), Humbrol (116) and Gunze (H-060) numbers.

The instructions also hints on differences in markings and stencilling between early and late aircraft, and the decal sheet includes several variants, so that various time frames can be depicted. 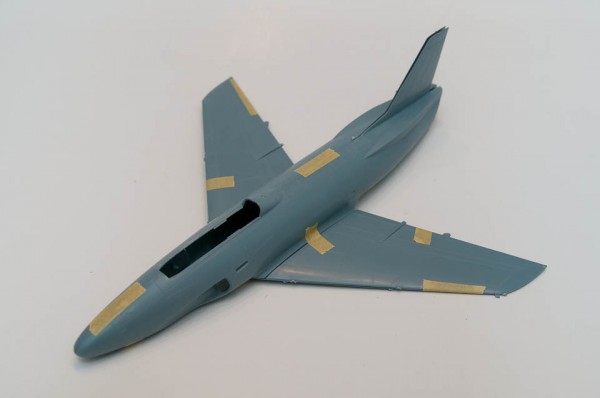 A quick test fitting of the fuselage and wings is promising. As is usual with short run kits, it has no location pins.

This is the ONLY 1/48 Lansen kit on the market. Perhaps there is an old vacuform from the age when dinosaurs roamed the earth, but it´s hardly “on the market” any more.
If you want something that is easy to build, and that is state of the art in detailling – look elsewhere, but if you want to build something odd, something of the Swedish Airforce and you are prepared to do some extra work?

Personally I have waited for this kit, and I knew all along that it would not be in the same class as anything from the large manufacturers, and I am very happy that it came to be. For a short run kit I think it looks very good.

I think Tarangus made a great job bringing the Lansen to us, and for that I am grateful. I hope I will be able to to it justice while building it. Looking forward to more releases from Tarangus in the future. A J32 “Lansen Sport” for example.

One of the founding fathers of Plastic Warfare, and the creator and administrator of this website.
View all posts by Erik Gustavsson →
This entry was posted in News, Reviews, Swedish Plastic and tagged 1/48, A32, Aircraft, Lansen, SAAB, Tarangus. Bookmark the permalink.

One Response to Tarangus 1/48 A32 Lansen review