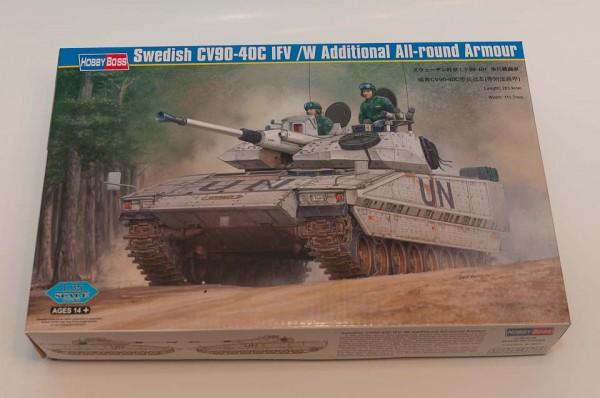 It´s finally here, the Hobby Boss Combat Vehicle 90C in 1/35. It has been a few years since it first appeared as a rumour on the internet.

For one and a half year now we have had the Academy CV90 available. The Academy kit however is of a B-version. If you want to build the version that is in use in Afghanistan you have to have the up-armoured Charlie version.

The Academy kit is not without its flaws, but over all it is a very nice kit. Lets see how this kit from Hobby Boss fares in a comparison.

The surprisingly small, but sturdy top opening box is packed to the brim with sprues. The box holds a total of 16 sprues,  among which can be noted four sprues for the road wheels, four black sprues for track pads and a transparent tree for lights. A brass fret with photo etched details is also included, containing among other things, nets for the engine air intake and radiator air intake. A decal sheet, a bag of track links, a colour printed paint/marking guide and an instruction booklet and the main hull parts top up the box.

The paint guide shows two alternatives, a white painted UN vehicle from the Liberia missions and a dark green vehicle. Seven different registration numbers are included on the decal sheet.

The instructions starts with the suspension and final drive assembly. Here we find two of the major flaws of this kit. The mounts for the suspension arms are symmetric, left/right on the lower chassis. In real life, these are slightly offset due to the construction of the torsion bar suspension. Hobby Boss made the same error on their 1/35 Merkava mk4.

This error is by no means unfixable, just cut away the suspension on one side and move it slightly forwards or backwards. Check references to see which side and how much. Whil

e not a difficult thing to do, it will require sanding and puttying and some effort. The question is, is it worth it?

The second error in this area, is the omission of the add on belly armour that the Charlie version of the Stridsfordon 90. While this too, will not be very visible on the finished model, it is quite easy to fix with some plasticard.

The reason for omitting the belly armour is, I guess, because that HobbyBoss wants to use the same bottom part for their upcoming Stridsfordon 9040B.

How does the chassis under side compare to the Academy kit? The Academy kit has much finer and more correct detailing. The suspension arms have the correct offset on the Academy kit. It is probably possible to kit bash the two kits, using an Academy bottom with a Hobby Boss upper hull. 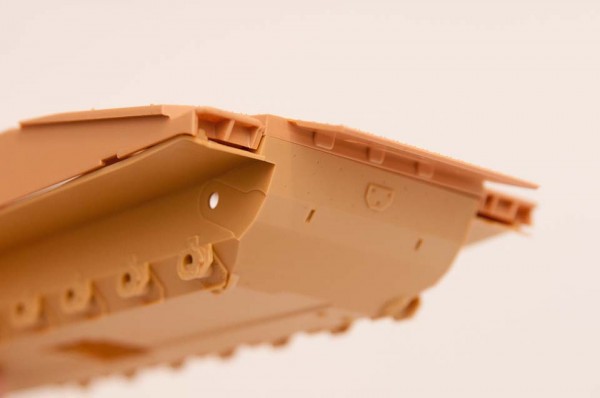 The academy lower hull mated to the HB upper hull

The next step deals with the road wheels. Each half of the road wheel is made up by two parts. The disk it self and a small ring, that is needed to create the special U-shape of the wheel. Academy solved this in a slightly different way, separating the rubber ring and outer rim from the wheel. Ironically the U-space on the rim is often covered by a ring of black foam on the real vehicle.

The wheels look good, but my personal opinion is that the Academy wheels are slightly nicer.

Speaking of nice, the Academy drive sprockets are almost pieces of art. The Hobby Boss sprockets are not bad either. They consist of two halves on which two sprocket rings are mounted. Just like the real thing.

Step three and four deals with the door to the troop compartment and the rear wall. They have separate parts for the add on armour, and need some holes to be drilled. Another hint of the coming of a Strf 9040B from Hobby Boss. The door has interior details, but there is no interior in the vehicle, so most people will close the door. The ladder like contraption to the left of the door is a ski-rack. It can be flipped up/retracted or flipped down/extended, on the real vehicle. Hobby Boss only gives you the option of building it extended. The ski rack has been around since the introduction of the Strf 90 in the Swedish army in the early 90-ies, and it was present on early Charlie-vehicles as well. However, when the Strf 9040C went to Liberia, it had its ski rack replaced by a storage sack. Later the sack was replaced by a metal box. This box has been used ever since, and is used by the Strf 9040C in Afghanistan today.

In the fifth step, the rear wall is mounted to the chassis. On the academy kit, this part fits rather poorly. The Hobby Boss kit fits together a bit better. The thorough builder will want to use some putty here anyway.

After this, it is time to look at the upper hull. On the Hobby Boss kit all the hatches for the stowage compartments are moulded on. The add on armour on the front is also moulded directly on to the hull. The hatches over the troop- and drivers compartments are separate pieces, and the troop hatches can be built either open or closed. (although the instructions will have you glue them on closed the option on having them open is shown on a separate leaflet – which shows three different alternatives, one of which is wrong. The hatches always folds up against each other then opened.)

The details on the upper hull are fine. The add on armour panels have a lot of rivet details and no-slip texture on them, like the real thing. There is however one small let down. It is the portraying of the anti slip tape. It far from as bad as on the Strv 122/Leopard 2A6 kits from the same manufacturer, but they are still raised a bit too much, and they are devoid of any texture. Academy does this much better I think.

Step seven deals with the head light assembly. The lights come on a transparent sprue, as on the academy kit. However, the outer glass panes on the headlights comes only as photo etched frames. It should be complemented with a small piece of acetate or something similar.

In the eighth step the two halves of the hull are put together. The fit is quite good. On the academy kit there is an ugly step at the front. On the Hobby Boss kit, the fit at the front is great, which is ironic, since an add on armour module will cover this area anyway. It does look promising for their Strf 9040B however.

Step 9 and 10 deals with the road wheels and drive sprockets, which promptly leads us to the tiresome work with the link by link tracks. Each link consists of a link and a separate pad. The track links are moulded in a gun metal plastic, while the pads are moulded in black. What you don´t get, are those pesky ejection pin marks that marred each link in the Academy kit. These links also click together. It is not a strong bond, but I think it might be helpful while assembling the tracks.

The 12th step is concerning the side skirts, that comes moulded on to add on armour for the sides. It looks ok I think.

Step 13 concerns it self with minor details and the tow cable. The Academy kit did not include a cable, the Hobby Boss kit does, but it is really thin, and I think it should be replaced by something slightly thicker.

From step 14 and on, it´s time for the turret, beginning with the 40mm Bofors gun. The gun barrel is a fairly conventional three piece affair, with the barrel split in two down the middle, and a separate cone shaped recoil enhancer. Sadly we do not get the same treatment as Academy has spoiled us with, with one plastic, slide moulded one piece barrel AND a turned aluminium barrel. Even more sadly, either academy barrel won´t fit/look good since the Hobby Boss gun is slightly larger. This is probably correct, since I got the feeling that the Academy Turret is slightly on the small side. Compared to the drawings in the SPHF book of the Strf 90, the hull is 98% and the turret just 96% (I know this because of a scratch conversion project I am also working on).

The turret is also a conventional two piece affair. The parts have a lot of rivet detail and the add on armour modules have a fine anti slip texture moulded on. The anti-slip tape on the turret also has a slight texture to it, compared to the anti slip tape on the hull.

There are a few pieces on the photo etch fret that are supposed to go on the turret. The sight cover is one of them.

There is however one really glaring omission when it comes to turret details. On the Strf 9040C the coaxial machine gun has been moved from its prior location beside the gunner, in the turret, to an external mount between the hatches for the commander and gunner. The new mount is fixed in traverse, and its elevation is linked to the main gun. There is an ammunition box behind and to the left of the gun, also on the outside. The machine gun itself has been switched, from a ksp m/39 (a version of the Browning .30) to the ksp 58 (FN MAG).

The machine gun and its mount is completely missing from the kit. This is, I think, the most annoying and difficult to fix error on the kit. True, when the Strf 9040C was first shown to the public, it lacked the gun, and many walk around pictures does lack the gun. So if you want to build an early, all green vehicle, the kit will be almost correct out of the box.

But now it is there, and on the vehicles sent to Liberia, that the kit provides decals for, the gun is mounted.

Maybe some after market people will cater for us? Until then, bring out the plasticard.
Painting and marking

The decals are not the strongest parts of the kit. The typeface of the registration number is looking strange, and they are not as sharp as I would like.

The guide shows a few alternatives when it comes to markings, but no clear indication on which swedish army registration number that goes with what UN number.

To summarise it all, I think the Hobby Boss Stridsfordon 9040C looks to be a nice experience. It goes together well, and has a nice level of detail.

The really large downside is the lack of the coaxial machine gun, the missing underbelly armour, and the lack of offset of the suspension. The lacking gun is the really annoying error.

Despite this, I cannot see why I shouldn’t recommend this kit. It is today the only Stridsfordon 9040C available, and if you just want to put a battle proven Swedish IFV in your shelf, it will look as good even with the errors described above.

The Academy kit has its ups and downs as well, and when summed up, I think the two kits are quite comparable. After all, they do portray different versions, so they really don´t compete, if you are a real CV90 afficionado like me.

As you can see in the pictures below, I have started building the kit, and scratched an external gun mount, and the other parts needed to make this a correct Liberia vehicle.

One of the founding fathers of Plastic Warfare, and the creator and administrator of this website.
View all posts by Erik Gustavsson →
This entry was posted in News, Reviews, Swedish Plastic and tagged 1/35, CV90, Hobby Boss, Review, Strf 90. Bookmark the permalink.