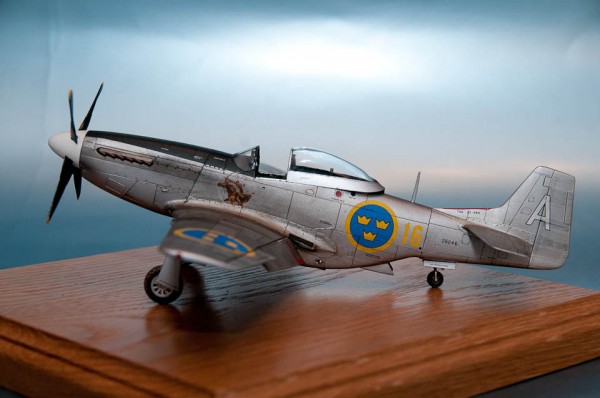 On 08-Open I met a nice guy called Robert Bergwall. He is the man behind the decals that is shipped with the Tarangus Lansen kit. He is showing and selling his own decals under the brand RBD Decals. When Robert offered to send me a few sets for me to try out and review I simply could not say no.

RBD Decals has so far specialised in Swedish Airforce markings with decals for Lansen, the J26 Mustang and odder aircraft like the Tp 83 Pembroke. This review deals with the sets for the J26 Mustang.

For our international readers a small historical information on the Mustang in Swedish service might be in place.

The Mustangs were bought in february 1945, used, one previously careful owner. A total of 93 was bought and used as a fighter and reconnaissance aircraft until 1953, when they were sold to Israel, Nicaragua and Dominican Republic.

They had a short but proud career in the Swedish Airforce, until they became replaced by jet aircraft like J28 Vampire and J29 Tunnan.

To this date RBD has produced three different sets portraying the Swedish Mustangs in 1/48. The same sets are going to be available in 1/72 shortly. In 1/32 it is likely that the most popular choices will be put in one set.

Most of the ‘stangs were natural metal, so the paint job was not too exciting. But most of the alternatives in the sets have some sort of “nose art”, so they are still interesting. Also, the colourful crown markings , lettering and spinners does stand out a bit.

The sets come with a colour printed placement guide that shows the various included alternatives and a generic stencil placement guide. The guide is in Swedish in my samples, but according to Robert they are available in English. The guide contains helpful hints on what to do to make a correct Swedish P-51 and the captions beneath each profile tells which stencils were used or not used, and other small details. In some cases there is an uncertainty regarding colours or markings. In those cases you are given the alternatives to choose from yourself. 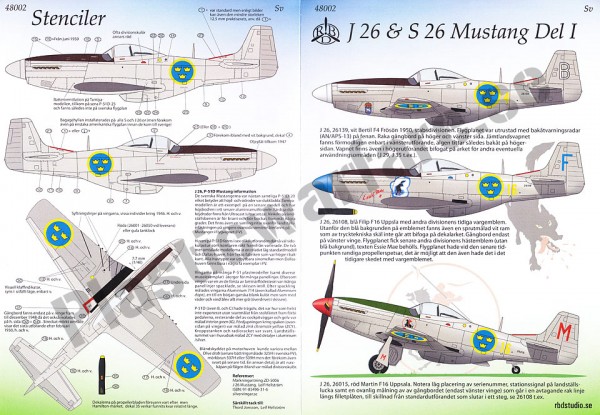 The first set deals with Mustangs from F4 at Östersund, F8 at Bulltofta, F16 at Uppsala and recce machines from F21. Decals consist of individual markings for 10 different aircraft, with crown markings and stencils for one aircraft only. 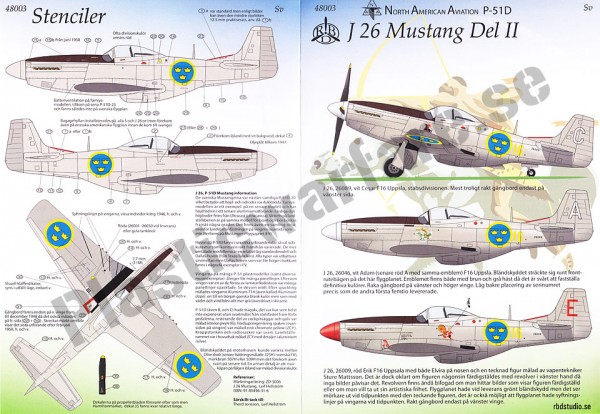 The second set mainly concerns fighters from F16, with one single a/c from F4. Nine aircraft are portrayed, again with stencils and crowns for one aircraft. 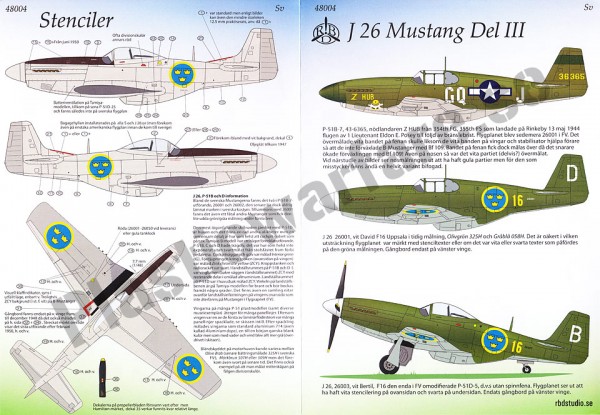 The third set stands out from the crowd in that it deals with the two P-51B that was Sweden got “for free” when they did emergency landings in Sweden during the war. One of the P-51B’s got three different marking alternatives, the first one shows it as it looked like when it came to Sweden, in its USAAF marking, the second is an all green/gray alternative, and the last version is all natural metal. The second P-51D was apparently never repainted, and never used operationally, thus only has the USAAF markings included.

The other alternatives in the set deals with two green P-15D (one of which lacks the fin fillet) and one natural metal aircraft named “Dyna Mike”.

All three sets can be ordered directly from RBD Decals website: http://www.rbdstudio.se

Now you know that the sets contains. Let’s talk about what you get. The decals are nicely printed, and with one exception, all in perfect register on my samples. The exception are the county shield markings on the Part I set, that was sadly a bit out of register.

One thing I noticed was that there is quite a lot of decal film margins. In some cases it would be an idea to cut the decals accordingly. But as I will mention below, it is not so much of a problem as it could be.

The second thing I noticed is that the crown markings is a deep, dark blue. I wouldn´t have thought about it if I hadn’t received a bunch of other decals at the same time on which the blue was different. I am not 100% sure of what the correct colour for the crown markings really is, but according to Robert it is close to Pantone 3005, which is slightly greener.
The book Kronmärkt gives the NCS number of S 3060-B10G which is closer to Pantone 315, and far too green I think!
Anyway, the decals look nice, and by them selves they don´t look wrong. For me it´s a non issue. If it´s a problem for you (if you have a collection and want all the crown marking to be the exact same for example) there are crown markings available separately I think. Buy one or more sets and use on all models to get the same colour.

I decided to build myself a Mustang and try the decals out to be able to do a really fair review of them. The kit is the well known Tamiya kit, in this case, the Tuskagee airmen boxing. The kit is built straight from the box. While there are a few small modifications needed to make a correct operational Swedish Mustang (or a correct operational Mustang at all) I focused on getting to the decal stage fairly quickly. The metal colours used are Alclad, and the decals are applied straight on to the alclad surface, then coated with Tamiya clear with matt base.

I used microset/microsol on the decals where I needed them to conform to panel lines. This worked OK. I did persuade the larger decals, like the crown marks to conform even better with the help of my hobby knife after they had dried in place. Decals not crossing any panel line did not need any microsol. I got the impression that the decals didn´t stick to the model very hard, so I used microset as an insurance.

The placement guide is mostly easy to follow. There is one mistake I made (well, I probably made several, but this I know of). The red angles that are supposed to go on the flaps. I didn´t quite get that they should go out all the way to the edges of the flaps, not just to the edge of what´s visible when the flap is retracted. Had to fix that with some red paint later.

The model is not really finished yet, it needs some detail painting and a seat. But I included it to show you some close ups on the decals. If I manage to get them look this good, then you can too!

There are a surprisingly high amount of small stencilling on a J26. RBD Decals have done a good job with them, they are perfectly readable when applied to the model. On the example to the left, the decals have been applied directly to the Alclad surface (shame on me, the finish is really horrible!). No clear cote before or after.

The RBD Decals decals are very nice to work with. If care is taken the result will be very nice. The attention to detail is very good. There are a lot of interesting Mustangs that can be built from the three sets.

I really recommend these sets to anyone who want a Swedish Mustang in their collection.
I am also looking forward to more exiting releases from RBD Decals in the future, with the upcoming J 32 Lansen from Tarangus, and the JA 37 Viggen from the same manufacturer.
I will look at the 1/72 scale Lansen sets from RBD in a coming review.

One of the founding fathers of Plastic Warfare, and the creator and administrator of this website.
View all posts by Erik Gustavsson →
This entry was posted in Reviews, Swedish Plastic and tagged 1/48, Aircraft, Mustang, RBD Decals, Review. Bookmark the permalink.