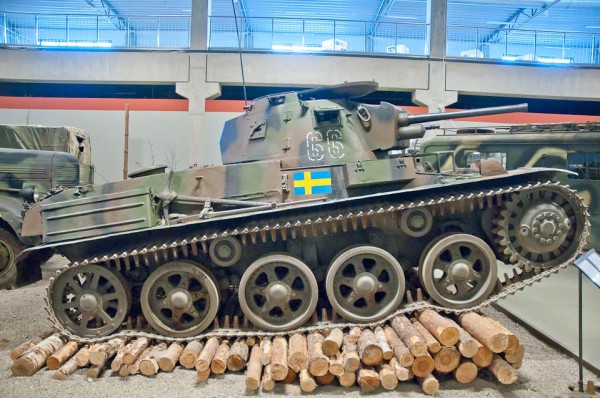 These photos are from the Stridsvagn m/38 that is currently displayed at Arsenalen.

The Stridsvagn m/38 was developed by the Swedish (but very much German) firm of Landsverk as the L60 in 1934. It was an advanced construction for its time, with welded armour, torsion bar suspension and radio. It was adopted by the Hungarian army that aquired the license to build it themselves, as the Toldi.
The Swedish army ordered 16 tanks with the potent Bofors 3.7mm AT gun in 1938, and it became the first gun tank in the army. In 1938 ans 1939, it was top of the line, in 1940 it was obsolete. Upgraded versions were ordered as the m/39, m/40K and m/40L. When those slightly up armoured tanks were delivered in 1940-42 they were obsolete too.

Please be aware that there are some things to keep in mind if modelling this vehicle. While the vehicle was in service during the world war 2, it has some post war modifications on it, so it is not perfectly accurate for a world war 2 vehicle. Also, there are details on the turret, like the lifting hooks, that was probably added to the turret when it was used as a defensive installation. Turrets from older tanks were supposed to be placed on prepared locations as defensive fortifications in the event of war. Many were assigned to air bases and similar installations.

One of the founding fathers of Plastic Warfare, and the creator and administrator of this website.
View all posts by Erik Gustavsson →
This entry was posted in Swedish Steel, Walkarounds and tagged Armor, Armour, Arsenalen, Stridsvagn m/38. Bookmark the permalink.

5 Responses to Stridsvagn m/38 in detail