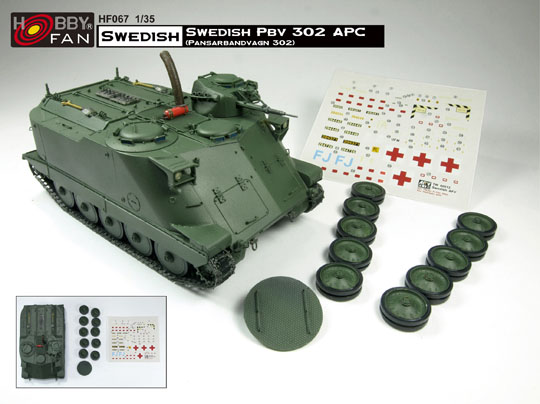 The wait is over!

I have not yet seen any price, but given that HobbyFan-stuff is far from the cheapest stuff around I guess it will cost an arm or a leg or two. But what I have seen from HobbyFan earlier, it might well be worth it.

As discernible from the picture the kit will be of a “standard, late” Pbv 302A with the M70 track rather than the M113 track. the kit seems to come with two different sets of road wheels, one set with the floatation discs in place, and one set without. The kit also comes with a round hatch to use instead of the turret, when making an ambulance version. Last but not least, there seems to be a nice decal sheet included.

What is missing from the picture are the two plates and its associated fittings on the hull front that is tilted forward when the vehicle is driven in water. But those parts might still be include in the kit. We´ll know at a later date. This kit will be reviewed here on Plastic Warfare when we can get our hands on it.

There is one more thing

There are two new PE-sets available for the Academy Strf 9040B.

The first two images show a set from a manufacturer called Mk1 Design, and the last two picture2 shows a set from Voyager.  Both are available right now, from among others, Lucky Models. More info and pics can be found here:

As with the Pbv 302, we´ll give you a heads up on these sets as soon as we can get our hands on them.

One of the founding fathers of Plastic Warfare, and the creator and administrator of this website.
View all posts by Erik Gustavsson →
This entry was posted in News, Swedish Plastic. Bookmark the permalink.

One Response to Breaking News: Pbv 302 in resin!